Is the church fixing or fueling the toxic cynicism of our culture?
by Skye Jethani

A poll conducted by Time has revealed that The Daily Show's Jon Stewart is the most trusted news anchor in America. He beat Brian Williams, Charlie Gibson, and Katie Couric. Walter Cronkite, having just entered his grave, must already be turning over in it. Stewart won with 44 percent of the vote. Brian Williams came in a distant second with 29 percent. See the results here.

Like many others of my generation, I enjoy The Daily Show. I find Jon Stewart to be intelligent and his irreverence is often refreshing, if occasionally too snarky or foul for my palate. Still, I wonder what it says about my generation when we vote someone like Stewart to be the most trusted voice in American news—especially when The Daily Show makes no claim of being a reputable journalistic enterprise.

When Stewart appeared on CNN's Crossfire in 2004, an argument ensued with Tucker Carlson about The Daily Show's lack of journalistic rigor. Stewart responded, "I didn't realize that the news organizations look to Comedy ...

Blessed are you
The Right Kind of Desperate
Losing cultural power can point Christians to Jesus.
Mandy Smith
Trending 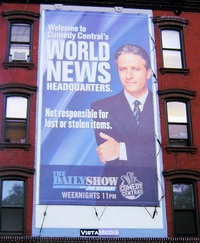