Francis Chan says we should stop trying to make people love Jesus, and learn to rely on prayer, elders, and the Holy Spirit instead.
A Leadership interview with Francis Chan

Francis Chan is making waves. Cornerstone Church, which he launched in 1994 in Simi Valley, California, has grown to reach thousands. Chan's popular podcast has carried his prophetic preaching to thousands more. And in 2008 his first book, Crazy Love, made a significant impact.

Recently he announced that he was leaving Cornerstone to take "a leap of faith" to a new kind of ministry. This interview was conducted before he announced his departure, but it points to the kind of spirit that many pastors long for in their churches, and also gives clues to what motivates Francis Chan.

He is calling Christians, leaders, and churches to complete surrender to Christ. The ramifications in Chan's church have been significant. Cornerstone is actively pursuing a new paradigm for ministry—a shift away from orchestrating large gatherings toward smaller geographic home groups with indigenous elders as leaders. This is part of what Cornerstone sees as the radical commitment Christ expects.

Out of Context: Rick McKinley
Trending 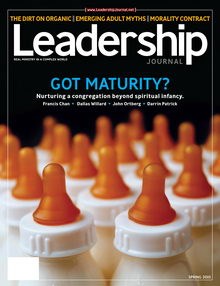