I left my first pastorate because I felt too constrained by the congregation's traditional mindset. They simply were not interesting in asking deep questions and finding new ways to engage the culture. The church was in rural Arkansas and was attended mainly by welders, electricians, and log truck drivers. We used the Heavenly Highways hymnal, had fifth-Sunday sings, and read from the King James Version. After a couple of years, I went looking for something more (whatever that means).

I ended up at an emerging church, although I didn't know to call it that. We met in a coffee shop filled with candles, played moody rock worship music, and talked a lot about authenticity. It felt more like a family than a church. And that's just what I was looking for. Unfortunately after a few years, I became disenchanted with that church, too. I felt like our values kept us from effectively carrying the gospel to our neighbors. The trouble was I didn't know where to go. Neither the traditional nor emerging ...

Join the conversation on Facebook
Tags:
BooksEvangelismPreachingSurveys
From Issue:Winter 2010: How Will They Hear Your Preaching?January 17, 2010 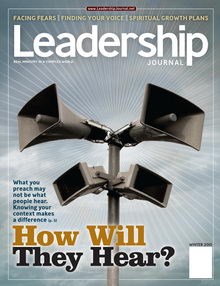