Urgent Care: Responding to Trauma
BCLStore.com
From the editor

Last night two of my marathon-running friends were telling me about hitting the dreaded "wall." That's what often occurs sometime after the 20-mile mark in a marathon, when runners' glycogen (stored energy) within the muscles is depleted, forcing them to slow the pace considerably.

They described feet feeling like lead, muscle coordination beginning to fail, and self-doubt eroding their motivation. They had to get more glucose into their system to have any hope of finishing.

I congratulated them for hitting it! After all, the vast majority of people will never hit the "wall" because they could never run the 20 miles to ever reach that point. All sorts of other body parts would fail long before they ever ran out of glycogen.

Christian leaders often describe a similar phenomenon to hitting the wall, only in the spiritual realm. It's called "the dark night of the soul," a phrase coined by St. John of the Cross in the 1500s. During such a dark night, which can last for years, God seems absent. ...

Join the conversation on Facebook
Tags:
Spiritual DisciplinesSpiritual FormationSuffering and Problem of Pain
From Issue:Fall 2011: Dark Nights of the SoulOctober 17, 2011 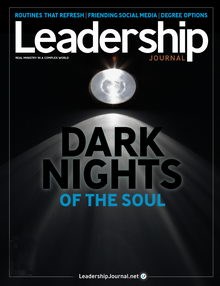 This article is from the Fall  2011 print issue of Leadership Journal. Subscribe to continue reading.