The way the Millennial generation approaches the world will inevitably bring some change upon the rest of us.
Nathan Kirkpatrick

A few weeks ago, I attended a high school baccalaureate service led by a group of students in western North Carolina. It was a Glee-meets-Gaither kind of affair, as much high school choir concert as tent revival. In the hour-long service, two students offered remarks; a third preached.

These teens surprised me. There weren't the usual clichés of graduation speeches; the students were asking markedly different questions than were asked at my graduation. Fifteen years ago, the questions our valedictorian posed were largely about our future resumés – what college we would attend, what military branch we would join, what jobs we might hold, and how we would scheme our way to success and fame.

Those were not the questions of this generation, in as much as three speakers in Statesville, North Carolina, represent it. Sure, there were nods to future jobs and teenage ambition, but the central questions they were asking were about identity – about who they are, who they are becoming ...

Discipleship |Outreach
Live from Shift: Mark Miller Podcast
Why social justice is much more than a political issue.
Trending 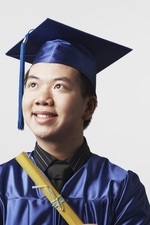