that I constantly have to fight
David Slagle

While discussing The Seven Habits of Highly Effective People by Steven Covey with some Christian buddies, one man said, "I have some friends who say we shouldn't read stuff by Mormons, or Muslims, or people of other faiths. What do you think?" I told him he should find some new friends.

Without question, we should use discretion regarding the images and ideas we allow into our mind, but God often reveals his wisdom in unexpected places. As someone once said: "Some books are like catfish: good eatin' but you have to spit out the bones." Such is the case with the writings of Dr. Albert Ellis.

Albert Ellis (1913-2007) was a psychologist, a devout atheist, and until late in life, openly hostile toward all things religious. His views on human sexuality were antithetical to the teachings of Scripture. For those reasons (and because he's dead) he would not be on the short list of speakers at most pastors retreats, but he does offer some wisdom and sanity for weary Christian leaders.

Discipleship |Leadership
Are You My Mentor?
Where to look for the guidance you need.
Natasha Sistrunk Robinson
Trending 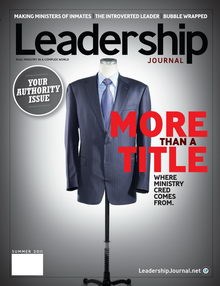