In the opening of the animated series "Family Guy," a couple at the piano complains in song about "violence in movies and sex on TV." It turns out there's more than ever to complain about—and not just on their show.

The incidents of nudity on prime-time broadcast TV quadrupled in one year.

ABC had the most pixelated scenes with 14, NBC had 12, CBS trailed with seven. The CW and Fox each had only two scenes where full nudity was blocked by blurring part of the image.

The Parents Television Council noted that many incidents occurred as early as 7 p.m. when children might be watching, and only five were on programs labeled "S" for sexual content.

The nudity count did not include animated programs, so Peter and Lois Griffin are safe—for now.

Do you think it should be legal ...

Cover Story
She Was Captured by the Taliban in 2001. But God Gave Her a Bigger Story.
Q&A with Heather Mercer who went on to work for freedom in Kurdistan and adopt a Kurdish son.
Rebecca Hopkins
Editor's Pick 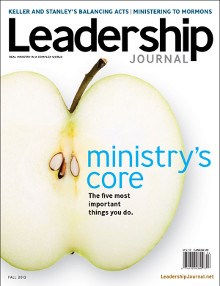 This article is from the Fall  2012 print issue of Leadership Journal. Subscribe to continue reading.