Catholics defend their opulent facilities, and how it applies to evangelicals.

If anyone knows how to ride out a scandal, it's the Catholic Church; after all they've been at it longer than anyone else. This is not to diminish the remarkable contribution of Roman Catholics to both the history and current mission of the Church. But perhaps evangelicals could learn a few things from both Catholic successes and failures in this area.

The latest criticism to be leveled at Rome is that it doesn't really care about the poor. It's an odd accusation given the Roman Catholic Church has possibly done more for the poor than any organization in history. Still, no one can deny that the Roman Catholic Church likes gold-gilded furniture (almost as much as classic Bond villain Auric Goldfinger and the folks at Trinity Broadcasting Network). The Catholic eye for opulence has sparked this popular meme:

A post at the Bad Catholic blog has responded to the accusation with a defense of "nice churches." First, the author identifies the complaint:

No sane man would defend the personal hoarding ... 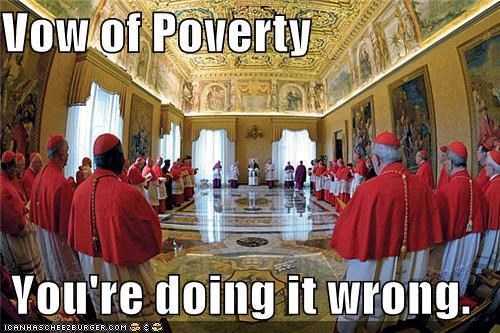