And other Leadership Journal reviews

Why Cities Matter: To God, the Culture, and the Church
By Stephen T. Um & Justin Buzzard (Crossway, 2013)

The Facts: The world is increasingly urban. In fact, as the authors say, "More people live in cities now than at any time in human history." Cities are the centers of culture and influence across the world, so it follows that they should be hubs of gospel ministry and church planting. Stephen Um, from Boston, and Justin Buzzard, from San Jose in Silicon Valley, have joined forces to show just how important cities are for ministry and what gospel ministry in the city needs to look like.

The Slant: Both of the authors planted and pastor churches in cities with distinct cultures. One is a hub of education and old influence; the other is a center of innovation and success. In this book they describe, sociologically and theologically, why cities are so significant to the expansion of Christ's kingdom. They trace the significance of urban centers throughout Scripture and ...

Discipleship
GRIEF AFTERCARE
When you leave the graveside, care for the family has only begun.
Kevin E. Ruffcorn
Trending 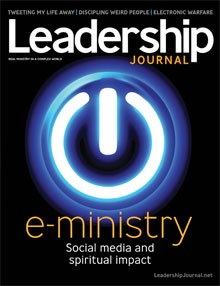 This article is from the Summer  2013 print issue of Leadership Journal. Subscribe to continue reading.