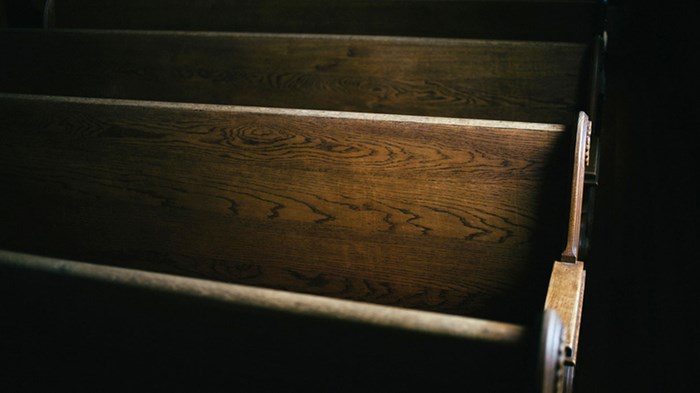 I'm a member of a small church. Our church had around 150 members when my wife, Abby, and I started attending almost seven years ago, but now our numbers are closer to 70-90. Our sanctuary, built for around 200, is often sparsely populated on non-Easter Sundays. Our nursery is stocked with toys older than I am. I make our coffee in a giant percolator—and it was an upgrade when I switched to beans from Costco. We still sing hymns, we still have Sunday school (which I teach), and our color scheme is anything but modern.

In short, we are not a megachurch in people, resources, or mind-set.

Yet over the years I have been so grateful for our small church, and many of its unexpected benefits and opportunities are specifically related to its … smallness.

1. Being in a small church has forced me to be in community.

When there are fewer people in a place, it's much harder to hide. The first Sunday Abby and I attended the church (we're members now), we sat in the back. Our intent was to bolt as soon as the benediction was pronounced so we could convene in the car and decide if it was worth returning. This was our traditional practice, and it had worked so far in the churches we'd visited. But after the service at this church we were—literally—chased down.

Our pastor's wife said, "Wow, you guys are fast!" and when someone acknowledges that you are running away, it's impolite to keep running. Before we could reach the door, we were introduced to the rest of the church. The next week we came early for Sunday school and stayed late for choir practice. As much as we craved anonymity, and as much as I would sometimes like to slink into it now, it was (and is) good for us to be known.

2. Being in a small church has forced me to serve.

When I was in college and attended the big college-town churches, it was very easy to take in a sermon, get the free college kid care package, and book it back to the dorm with no strings attached. This is much harder to do in a small environment. When Isaiah has his vision of the Lord, there are lots of angels around, but Isaiah is the only human witness. When the Lord says, "Whom shall I send? Who will go for us?" there aren't really any other options. I suppose Isaiah could have refused, but doing so would have highlighted his own unwillingness as the excuse—there was no one else to hide behind. Similarly, in a small-church environment, when something needs to be done, it's much harder to trust that someone else must be taking care of it. Often my response to a need must be, "Here I am. Send me." This isn't always my preference, but it is almost always for my good.

3. Being in a small church has forced me to reckon with diversity.

My church is a community church. While some people drive to be part of our body, most of our members live close to the building. While you might think that such a small geographic area would lead to homogeneity, it has produced a surprising amount of diversity. Different races, different socioeconomic statuses, and especially different perspectives are represented. Someone might look at our little body and say, "What on earth do you have in common?" And that is exactly how the church should be. We come together because we have one important thing in common: our Head, Christ.

If I am self-selecting whom to invite for a party, I'm tempted to choose those who are most like me in looks, beliefs, and interests. And, indeed, a small church body isn't necessarily a guard against homogeneity—a congregation can reach homogeneity no matter its size. But in our body, whenever someone new joins us for worship, and especially if they stick around, they bring their unique perspective. Their presence seasons the stew. When our body was larger, Abby and I were able to stick with people who were almost exclusively like us. It has been such a gift, with the shrinking of our body, to be forced to interact with people who are older than us, who are more conservative than us, who are more liberal than us, who have less education than us, who have more education than us, who have different struggles from us.

G. K. Chesterton, in his typical contrarian way, talks about how there's often greater diversity on the street where you grew up than in the city, where it's easy to find people just like you. He explains, "We make our friends; we make our enemies; but God makes our next door neighbour. … We have to love our neighbour because he is there." This may seem a strange way to describe a voluntary organization, but when you are committed to a body, you are committed no matter who shows up. And you are committed to stick with the others who are there, even when you disagree.

4. Being in a small church has offered opportunities I might not otherwise have had.

When you have a larger pool to draw from, you get to decide who does what based on already honed skills. Believe me, there is something to be said for this. But there's also something to be said for the development that takes place in an environment of need. Several years ago I was asked to serve as a deacon at my church. I was in my mid-twenties at the time, and while I had grown up in the church, I had absolutely no idea how to do what was expected of me, yet I also knew that there weren't too many others who could serve on our deacon board. Disbursing benevolence funds, counting offerings, making budgets, allocating church resources—I wouldn't say I was ready for any of this. But often our readiness isn't important; obedience is. This opportunity would likely have been closed to me in a larger church, but I'm grateful I was given it when I was unprepared—it forced me to use and develop latent gifts I didn't know I had.

Similarly, I have been given opportunities to preach—and develop my preaching. This isn't something I feel particularly called to or gifted in, but my pastor has encouraged me to do it anyway. He has worked with me to develop more of a style, he has counted my "ums," and more important, he keeps asking me to do it, and I'm getting better at it. G. K. Chesterton has said that "If a thing is worth doing, it is worth doing badly," and there is much more opportunity for doing something badly in a small church. But doing something badly is how you begin to do something well.

Of course, I've used the language of force in my statements above, but none of this is compulsory. We live in an age of denominations, nondenominations, and church libertarianism. It's not necessary to submit yourself to a church body, or even to leave your home to "attend" church. And it's easy if you don't like something to vote with your feet—to go to the church down the street, which won't require as much of you, or that aligns more with you in this way or that.

Indeed, there are some days when being part of a small church isn't that great. Like when I'm forced to deal with conflict within the body because these people are family, and I can't abandon family (as much as I want to sometimes). Like when I am compelled to take one more church duty onto my already-full plate. When my family can't worship together because our toddler won't sit through service … and the nursery is mostly self-serve. In these situations, I pine after churches with slick programs and legions of volunteers. But when, while I'm teaching Sunday school, someone offers to hold our newborn so that Abby can attend to our toddler, and I know that when they stood at my children's dedications, pledging to do what they can to help us raise them, they meant it; when I'm struggling and can approach someone who knows me and who genuinely cares and wants to help; when Sunday school or service is interrupted and redirected because of someone's pressing need; when I see a small community committed to each other not because they are alike but because they are there, I see a (small) segment of the Kingdom of God.

Jonathan Schindler is a nonfiction editor at Tyndale House Publishers. He works and worships in Carol Stream, IL.

Discipleship |Leadership
The Age/Attendance Paradox
Those most open to the gospel are least likely to visit church.
Trending