To see God work, we had to escape our four walls. 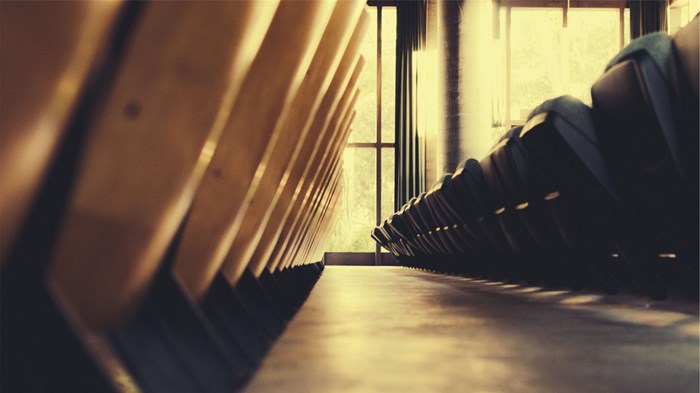 Most churches get kicked out of their building.

Not us. We got kicked into our building.

Our inner city multi-ethnic church plant had been meeting for some time around lunch tables outside in a public schoolyard. Our neighborhood houses the poorest school in the district. We welcomed people from off of the street, ate with them, and held our church service in the open air.

But one resident from a nearby apartment started writing us angry letters about the noise. We apologized, lowered the volume, and prayed. A few Sundays later, this same resident was taking out his trash when he was arrested by the preaching of Romans 8. He stopped and listened to the entire sermon while standing by a dumpster in the alley. Afterward, he rounded the corner, weeping, and told us he had heard God speak to him.

A few weeks after that, while I was preaching, somebody yelled over the wall that we were too loud. A lady in the service piped up that he was next. I apologized for the noise, nodded to our sound guy, and kept preaching. The next day, however, we received word from the principal of the school that we'd finally need to start using the auditorium we had been paying for. But we were far from being done with doing church in public spaces.

At one time I feared that if we ventured into public spaces, we'd be labeled as weirdos, freaks. I've never been keen on making Christians look even crazier than we are, so I shied away from taking church outside the four walls. But I eventually decided that rather than "having an outreach," the church service would "be" the outreach. It's radical, it's risky, but it's effective, and it's taken me nearly 20 years to arrive here.

I blame Europe. Embarking for Europe as a church planting missionary 15 years ago, I got my first taste of open air ministry when I served at Martyn-Lloyd Jones's legendary church as the evangelist. The elders wanted me to preach on Saturday mornings in the open square. Initially I found it awkward, but I couldn't shake the conviction that like Wesley, Whitefield, and William Booth, there had to be something for our time that could take church to the people, instead of expecting the people to come to the church. From there I experimented with public discussion groups on university campuses and pubs and eventually launched a church in a Starbucks.

Ministering on the postmodern, post-Christian frontiers of Europe made the book of Acts come alive for me. The reason is simple: A post-Christian world is very similar to a pre-Christian world. Acts 5:42 says the apostles met "in the temple and from house to house." Many have misread "temple courts" as being synonymous with church buildings. But they were far more public. By preaching in the temple courts, the apostles were practicing the lost art of ministry in public space, in open venues. I used to read the book of Acts and ask why what I did as a full-time minister looked nothing like what Paul and the Apostles did. Leaders go to seminary, learn theology, exegete texts, and stitch together homilies, and yet graduate still unable to do what the Apostles did; take the gospel message out to a community. Many are filled with fear and struggle to talk to people beyond the borders of the church parking lot.

Back to the future

Returning from Europe to minister in America again was like disembarking from a time machine. Britain is about 60-70 years further down the post-Christian path than America. Perhaps this is one of the reasons C.S. Lewis is so relevant to contemporary American Christians; we're breathing the same cultural atmosphere of spiritual decline of mid-20th-century Britain, the time when Lewis wrote. Lewis was writing to a culture in which Christendom was lost, the churches were in decline, and people needed to be convinced to believe.

I train church planters to minister in public spaces to prepare them for a future when I'm convinced the attractional model of church will falter. Fewer people are willing to step inside a church building. Before I went to Europe, my version of training leaders for the future would have been to help them do more of what's not working, albeit a sleeker, cooler, trendier version of what's not working. I would have trained them to attract bigger crowds, make the service more excellent. All of that was great for the '80s and '90s, but that's becoming less and less effective in our culture.

Many churches are prepping themselves for future that isn't coming. Our strategies rely upon utilizing tomorrow the buildings we've built today. But if Europe is an indication of where things are going, where ornate church buildings are being converted into nightclubs, mosques, and carpet warehouses, our buildings may fail us as well. Like the subterranean Cold War bunkers buried across America, many of the church's fortifications will be useless when the future we anticipate fails to materialize. In Europe, all of the bastions of religion became barriers to the culture around them, and too many of us in America are following suit.

To prepare for tomorrow we must do what the apostles did: take church to the streets, concert venues, coffee houses, breweries, or wherever Mars Hill is nestled at the cultural crossroads.

I'm not saying simply meeting outside is a silver bullet for all the woes of the future. We will always need traditional setups to minister effectively to certain people. But the percentage of people reached by that approach will wane. It already has. The future of ministry belongs to those, not who can draw a crowd, but who can penetrate one. Those who can infiltrate a community from within, instead of directing traffic to a building on the far side of town.

Here are a few ways I've found to escape the four walls of the church and engage in ministry out in my neighborhood.

We need more beat-cops, and fewer desk-cops. Charles Spurgeon talked about ministers who were disconnected from their culture, being "at home among the books, but at sea among men." How was I going to reach the lost by drinking coffee with Christians and churning out homilies?

God crow-barred me from my study not long after I joined Martyn-Lloyd Jones's church by drying up my missionary support when 9/11 struck. I was forced to take a factory job on an assembly line alongside the very people I was trying to reach. After being commissioned as "the Evangelist" for over a year, I hadn't seen a single person follow Jesus as a result of anything I had done. That began to change on the factory floor. The truth is the average employee will come into contact with more people by noon on Monday than the average pastor will in an entire week. Suddenly I didn't have that problem.

Necessity was the mother of invention. I had to get creative and engage in bold ventures like visiting pubs and nightclubs armed with a video camera and let people tell me their stories. Those late night violent streets in the working steel town of Port Talbot, Wales, gave me an education. People divulged their stories and wept as the film rolled. That was my first journey out of my study, and it's been hard to keep me in it ever since.

Since this journey began, we have launched ministries in the parks and projects of Long Beach and San Pedro. We've done open mic nights in the local gay coffee house. We've made plenty of mistakes, and the learning curve is steep. We've learned that before you do an open mic night, you buy drinks on the house to kick it off. You also don't stack the deck with too many Christians.

We're still learning, but we're still pushing further into the deep end. Our leadership is currently discussing renovating a corner gas station in the heart of the ghetto. Each church that we plant in public space looks different because we're not smart enough to know what to do in every situation. We need to find the marketplace of that neighborhood and depend on God to lead us.

For the most part, the British church's response to the postmodern shift was to revamp their theology, morality, and worship—all to no avail. Instead of becoming something more attractive to the unchurched, the message wasn't worth listening to. The lax approach to God made church not worth the gas or time. There was no experience of God there. Elvis had left the building.

For years I sat in the pews hearing missionaries talk of God working powerfully overseas, but wondering why we never saw it. I don't wonder that anymore. Missionaries shouldn't have all the best stories. Now, the people who plant with our teams tell those stories. My theory is that the more frontline you go, the more you experience what you read in the book of Acts. After all, why would the Comforter come to the comfortable?

The Holy Spirit empowers those who step out of their comfort zone and put themselves in a place where they need him. Truth be told, the average church doesn't really need the Holy Spirit for much of what's done on a typical Sunday morning. Stepping out in the risky business of mission is a slipstream into the working of the Holy Spirit, and a ticket to a front row seat to what God is doing in the world.

We've learned that doing church in public spaces will repel consumers, but attract disciples. Those disciples will become the next generation of leaders, and they will reproduce themselves. The next time a church gets kicked out of a building, they should consider that maybe they're now where they belonged all along.

END_OF_DOCUMENT_TOKEN_TO_BE_REPLACED
Already a subscriber? Log in
Read These Next