Leading God’s people means bringing lofty truths down to where everyone can reach them.
Kevin J. Vanhoozer 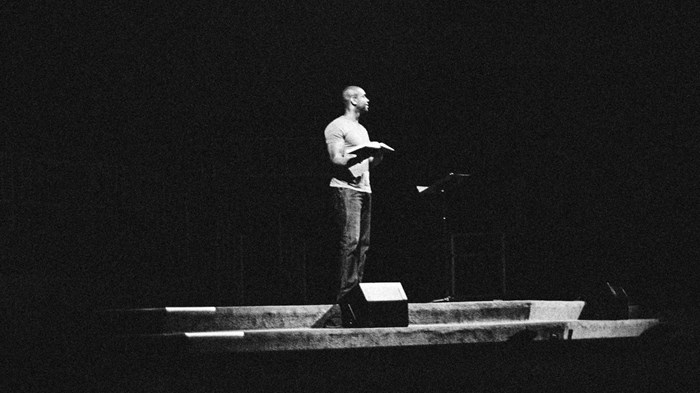 My high school French teacher once described the peculiar passion for his own vocation in the following terms: “The joy of teaching lies not in one’s own enthusiasm for the students, or even for the subject matter, but rather for the privilege of introducing the one to the other.”

If this is true of French, chemistry, or history, how much more is it true of the pastor’s passion, which is not simply love of God or love of people, but rather the love of introducing the one (people) to the other (God)? The pastor’s special charge is to care for the people of God by speaking and showing, being and doing God’s truth and love. Success in ministry is determined not by numbers (e.g., people, programs, dollars) but by the increase of people’s knowledge and love of God. This is the only way “to present everyone mature in Christ” (Col. 1:28).

Pastors must be public theologians. But pastor-theologians, in order to minister truth, must also be “intellectuals.” An intellectual is one who speaks meaningfully and truthfully about broad topics of ultimate social concern. The truth of God’s plan for the world is clearly such an issue! Indeed, even to speak of “God” is to address a topic of potentially universal concern. Surely we would not want those who speak of God’s plan for the world to be anti-intellectual?

What do I mean by “intellectual”? There are intellectuals in the academy as well as society, but they are few and far between. Most academics are specialists: they know a lot about a little, but they are often tongue-tied when forced to address the big questions. Yet on a regular basis pastors address the big questions – questions of life and death, meaning and meaninglessness, heaven and hell, the physical and spiritual. To be sure, no church wants a pastor to be an intellectual if this means being so cerebral and preoccupied with ideas that one cannot relate to other people. This kind of intellectual is so theoretical as to be practically good for nothing. However, the kind of intellectual I have in mind is a particular kind of generalist who knows how to relate big truths to real people.

Surely we would not want those who speak of God’s plan for the world to be anti-intellectual?

In Pastoral Theology Tom C. Oden examines a number of titles for ministers (e.g., curate, rector, priest, reverend, etc.), finds that each illumines an aspect of the pastor’s work; he concludes by stating his preference for pastor as the central paradigm, with shepherding as the pivotal analogy. Our English term “pastor” derives from the Latin pastor (“shepherd”). More important, Jesus designates himself the Good Shepherd (John 10:1-18) and commissions Peter to “Feed my sheep” (John 21:17). Oden thinks the shepherding analogy still works in a postindustrial society because the Bible spells out how the shepherd relates to the flock. Interestingly enough, one of the marks of a shepherd also characterizes intellectuals: “The shepherd characteristically is ‘out ahead’ of them, not only guiding them, but looking out, by way of anticipation, for their welfare.”

The flock of Jesus Christ is threatened not by lions, bears, or wolves (1 Sam. 17:34-35) but by false religion, incorrect doctrine, and ungodly practices – not to mention “powers and principalities” (Eph. 6:12, KJV). Consequently, pastors who want to be out ahead of the congregations must be grounded in the gospel and culturally competent. Public theologians help people understand the world in which they live and, more importantly, how to follow Christ in everyday as well as extraordinary situations. “Ministerial leadership is, first and finally, discipleship.” Lesslie Newbigin, wrote in The Gospel in a Pluralist Society. Though to follow Jesus one has to know where one is, what is happening, and which way is the way of truth and life. The pastor-theologian is the “organic intellectual” of the body of Christ, a person with evangelical intelligence who is “wise unto salvation” (2 Tim 3:15 KJV). (I take the term “organic intellectual” from Antonio Gramsci, a twentieth century Italian social theorist and literary critic.)

Ahead of the flock

“The mode of being of the new intellectual can no longer consist in eloquence, which is an exterior and momentary mover of feelings and passions, but in active participation in practical life, as constructor, organizer, ‘permanent persuader,’ and not just a simple orator.”

The term “organic intellectual” gives concrete content to the analogy of the pastor as shepherd. The pastor-theologian is an advocate for the community of God’s people. The pastor-theologian takes every false thought captive to sound doctrine (2 Cor. 10:5) – christological “ideas” (i.e., truths) that are both indicative of life and life-giving.

Theologian David Wells points out that historically church leaders were scholar-saints, pastors who were “as comfortable with books and learning as with the aches of the soul.” Reading books–not only of theology but also of fiction–ought to be part of every pastor’s plan of action for staying out ahead of the flock.

It bears repeating: pastor-theologians ought to be not academic but intellectuals, and organic intellectuals at that. Pastor-theologians do not need to be the smartest people in the room–but then again, neither did the apostles. When Peter and John were arrested for preaching the gospel and dragged before the Sanhedrin, they had to do some impromptu–or rather inspired–public speaking: “This Jesus is the stone that was rejected by you, the builders, which has become the cornerstone. And there is salvation in no one else” (Acts 4:11-12). When the high priests, elders, and scribes – all highly trained in rabbinic schools–saw the “boldness” of Peter and John, they were astonished, for “they perceived that they were uneducated, common men” (Acts 4:13).

Peter and John were not geniuses but apostles: they knew something that the Sanhedrin did not know (“He is risen!”) and they knew it not because they were clever but because they were told. They had learned something, something that astonished the Jewish leaders, but they had not learned it at school. Luke tells us that the Jewish leaders recognized that Peter and John “had been with Jesus” (Acts 4:13)–an understated way of acknowledging their educational qualifications.

Pastor theologians know something others do not, and they know because the Bible tells them so. To be instructed by the Spirit in the school of the Scriptures is to be, as Peter and John had been, “with Jesus.” What pastor-theologians know is something quite particular (what God was doing in Christ) but has enormous, even universal, implications. The organic intellectual resembles not the fox, who knows many things, but rather the proverbial hedgehog, who knows one big thing: in this case, what God is doing to create a people for his treasured possession (Ex. 19:5; Dt. 7:6; 14:2; 26:8; Mal. 3:17; Tit. 2:14; 1 Pet. 2:9).

Pastor-theologians are generalists, yet with a difference: they give voice to the church’s understanding of the meaning of life–or rather, the meaning of the life hidden in Christ (Col. 3:3). Pastor-theologians know something particular and definite, but strictly speaking, it is not “specialized” knowledge. The pastor theologian is a special kind of generalist: a generalist who specializes in viewing all of life as relating to God and the gospel of Jesus Christ. Better: the pastor-theologian is an organic intellectual who is present as the mind of Christ, which animates the body of Christ.

Kevin J. Vanhoozer is research professor of systematic theology at Trinity Evangelical Divinity School and co-author, with Owen Strachan, of The Pastor as Public Theologian (Baker, 2015).

This article was adapted from The Pastor as Public Theologian. Used by permission.