They remain his set-apart people, no matter who sets upon them.
Derek Rishmawy 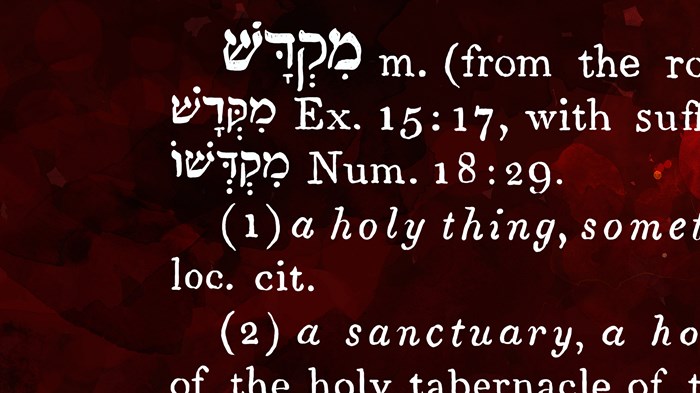 But what happens when the sanctuary is violated? When violence lights the sanctuary walls on fire? When the safe haven is riddled with the bullets of those broken and guilty who were welcomed within, with opened arms? How should we understand these realities?

For some, churches are “sanctuaries” because in them, the broken, the wounded, or even the guilty come to take refuge. In the medieval period, English common law and church canons held that a debtor or fugitive fleeing from the strong arm of the law could find a haven in the church.

For others, relatedly, “sanctuary” evokes the physicality of the church. In the early commonwealths of this world, the walls of the sanctuary—reverberating with the gospel of God’s forgiveness in the eternal kingdom—provided some respite. To speak of a sanctuary is to speak of the sanctuary: the building with a steeple, a pulpit, some pews, a baptismal font, and the table. Here is where the church gathers: in the sanctuary, a place set apart for the Lord.

In all these common usages, the idea of “sanctuary” conjures up a sense of safety, of set-apartness, of refuge, and of peace.

A Place Set Apart to the Lord

Typically, the term referred to the great Tent of Meeting and its broader precincts that the Lord instructed Moses to build in the desert: “Then have them make a sanctuary for me, and I will dwell among them” (Ex. 25:8). The holy, set-apart God saved a kingdom of holy, set-apart people from among the nations to be his own treasured possession (Ex. 19:5-6), and the sanctuary was to be his holy, set-apart dwelling among them:

In many ways, the desert sanctuary was a return to Eden, which most scholars recognize today as the original sanctuary where the Lord walked with Adam and Eve in the cool of the day (Gen. 3:8). This is why it needed to be kept set apart and pure.

In that first sanctuary, the Serpent violated the holiness of God’s dwelling with impure, violent, disruptive lies to deceive the man and the woman, drawing them into rebellion, sin, and death. Rendered unholy through sin, they were exiled from the sanctuary of God’s holy presence, kept out through flame and sword (Gen. 3:22-24).

Much of the ceremonial and ritual law introduced in the Torah—even the initially bizarre legislation caught up with issues like bodily fluid, clean clothes, skin sores, and not eating creepy, crawly animals—is concerned with symbolically driving home the reality of sinful flesh, death, and the stunning mercy of the forgiving God who has given them access to himself once more.

Dependent on grace, Israel must learn to once more “be holy as I am holy” (Lev. 11:44-45; 19:2), in both her ritual as well as her moral life, avoiding the idolatrous practices of her neighbors. Indeed, the moral and the ritual are two sides of the same coin.

Here we find the paradox and tension of the sanctuary of God (both as tabernacle and later as temple) in the Torah: it is the set-apart place that emphasizes both God’s nearness and his holy transcendence. It can only be approached and entered with extreme caution; under prescribed conditions; and through purification, atonement, forgiveness of sin, and the mediation of the priesthood God has given them.

To dishonor God’s sanctuary is to court wrath and judgment (Lev. 10:1-3). And yet its approach—drawing near to the God who is other, pure, holy, and perfect—is precisely the sanctuary’s purpose.

For this reason, the sanctuary of God is a delight and a refuge. In Psalm 84—a representative temple psalm—the dwelling place of the LORD, with its courts and glories, is a place of delight: a place where even the birds find rest for themselves and the halls resound with praise because of the presence of the living God. Here God’s people find their rest.

A Place and a People Set Apart

In the New Testament, Jesus restructures the sanctuary. The eternal Son comes in the flesh to tabernacle among the people (John 1:14)—he becomes God with us as the true sanctuary and temple. In him, the holy one dwells with his people. In him, they find refuge and healing.

Even further, united by faith with Jesus, God’s new, holy, set-apart people become the holy, set-apart sanctuary to the living God (1 Pet. 2:4-5). In Christ, they receive their holiness, purity, and forgiveness of sins, rendering them a fit dwelling for the Holy Spirit (1 Cor. 3).

This is a growing sanctuary—through its gathering, worship, and shared, holy life, it expands its boundaries, inviting in those who are outside. Indeed, Acts 2 depicts something of the transformation, with the nascent sanctuary of the church growing as a seed from within the stump of the old temple courts. Church buildings become “sanctuaries,” then, because they are set-apart places where the sanctuary of God—the church—meets in his name.

What can we say, then, about the violation of God’s sanctuaries?

God Is in His Sanctuary

So often, when we read of an attack, a shooting, or a burning, we’re tempted to ask: where was God? When his house is under assault, why is he not there? And yet the first fact we must be clear on is that God is not indifferent to these attacks on his holy sanctuary.

There are many passages in the New Testament that drive this home, but none more clearly than Acts 9:4, where Jesus confronts Saul with the words, “Saul, Saul, why do you persecute me?” Saul is ravaging the church, dragging believers off to jail. We might expect Jesus to say, “Saul, Saul, why do you persecute my people?” Instead, Jesus makes it abundantly clear here that an assault on the church is an assault on his own person.

John Calvin’s comments on the passage beautifully capture the heart of this verse, suggesting that by this, God “will have us to be assuredly persuaded of this, that he suffereth together with us, as if the enemies of the gospel should wound us through his side.”

Where is God, then, when his sanctuary is under attack? Where else but among and within his people, by the power of his Spirit? Jesus does not hold himself aloof from our sorrows, but he calls them his own and carries them along with us.

God Will Avenge and Protect It

One more truth that ought to be understood is that God will not always allow his sanctuaries to be violated, though he does allow it for a time. This also should not surprise us. If the sanctuary is built on the cornerstone that was rejected, despised, and violently cast aside (1 Pet. 2), then we should expect to suffer, as well.

The sanctuary the Lord offers in this life is not necessarily peace from troubled, outward circumstances—there’s a reason Jesus blesses those who will suffer for his name’s sake (Matt. 5:10). He knows suffering is coming.

But God will not allow this to carry on forever. Calvin comments again on Acts 9:4: “that we may hope that he will revenge our miseries, who crieth out of heaven that all that which we suffer is common to him as well as to us.”

Paul, the one who experienced the Lord’s intervention on behalf of his church, warns that “if anyone destroys God’s temple, God will destroy that person; for God’s temple is sacred, and you together are that temple” (1 Cor. 3:17). He comforts the Thessalonians suffering violent persecution, saying that “God is just: He will pay back trouble to those who trouble you and give relief to you who are troubled” (2 Thess. 1:6-7).

God isn’t vindictive, nor ought his people to be so. But he is just. The cries of his saints—the assaults on his sanctuary—are costly to him.

Thankfully, it is because we know this that we are urged not to pay back evil for evil, not to be overcome by evil. Instead, we can leave vengeance in the hands of the Lord, trusting him in all our sufferings (Rom. 12:17-21).

His Sanctuary Cannot Ultimately Be Overcome

Ultimately, the assaults of God’s enemies cannot overwhelm God’s sanctuary. When the holiness of his sanctuary is lived out, the violence of those who would attack and profane it does not violate that holiness. When God dwells among a people, they remain his set-apart people, no matter who sets upon them. As Jesus said, “The gates of hell shall not overcome it” (Matt. 16:18).

One extraordinary sign of this reality came in the forgiveness offered to the shooter by the families of the victims at Emanuel AME Church in Charleston, South Carolina. In the wake of the kind of violence and hate they experienced, struggling with forgiveness is normal, right, and understandable. It takes time, and none could have faulted those families had they kept quiet.

But what the world saw at that moment in Charleston was something of a miraculous, public sign of a deep, scandalous reality: the reality of the gospel of a holy God who does not have to be gracious, but who nonetheless wills to be so in Christ. This is mercy of the God who comes near to us, who makes a sanctuary for himself out of sinners, and who then offers the sanctuary of the gospel to others.

And so when the forgiveness of sins was offered in Christ, as it was that day, these family members were a special testimony of the Holy Spirit, declaring that the violence of the profane cannot overcome the holiness of God’s sanctuary—God’s holy people.

This is the sort of mercy, holy forgiveness, and grace we see acted out on a smaller scale in sanctuaries across the world every week, as God dwells among his people. In these places, families are reconciled, the poor are fed, mercy is extended to the broken, and the gospel is preached to guilty sinners needing respite from the weight of their sins. It is this same holy life that was on display in the forgiveness offered in Charleston.

What happens when the sanctuary of God is assaulted? God reveals his life in the lives of his sanctuary people, his people who become a refuge: one that even the violence and violation of the world cannot overcome.

Seasoned Salt
His Eye Is on the Pastors
God sees and watches (as do others), which is both a comfort and a caution as pastors navigate their calling.
Dennis R. Edwards
Trending