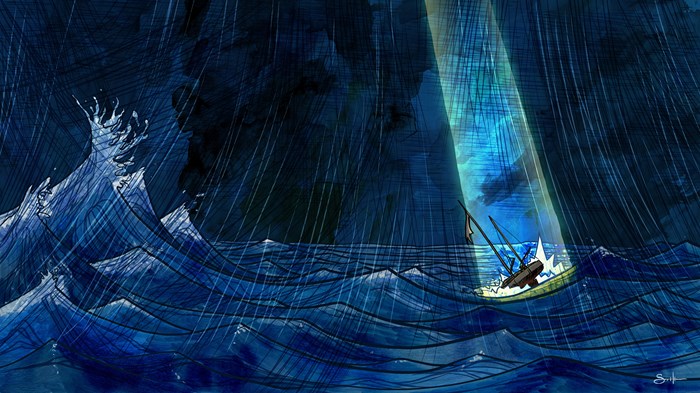 “Let’s say there is a ship on the high sea, having a fierce struggle with the waves. The storm wind is blowing harder by the minute. The boat is small, tossed about like a toy; the sky is dark; the sailors’ strength is failing. Then one of them is gripped by . . . whom? what? . . . he cannot tell himself. But someone is there in the boat who wasn’t there before. . . . Suddenly he can no longer see or hear anything, can no longer row, a wave overwhelms him, and in final desperation he shrieks: Stranger in this boat, who are you? And the other answers, I am Fear. . . . All hope is lost, Fear is in the boat.”

On January 15, 1933, in a Berlin church, Dietrich Bonhoeffer delivered this haunting allegory in a sermon entitled “Overcoming Fear.”

Germany was in the midst of fearful and turbulent times, indeed. The devastation of defeat from World War I, just 14 years earlier, was fresh on the people’s minds and hearts. The Stock Market Crash of 1929 compounded further pressures on the struggling German economy, driving the number of unemployed to more than six million. The new Weimar Republic lacked political stability and leadership, and fears of communism and extremism loomed large. As these dark waves battered them from all sides, many Germans—including German Christians—feared what the future would hold.

“Fear is in the boat, in Germany, in our own lives and in the nave of this church—naked fear of an hour from now, of tomorrow and the day after.”

“Fear Has Conquered Us”

Another rising leader took interest in this dire situation, but he offered a quite different solution. Rather than help people overcome their fears, he sought to exploit them for power. With a commanding sense of authority and a persuasive tongue, he offered them a savior: himself.

“That is the final triumph of Fear over us, that we are afraid to run away from it, and just let it enslave us. Fear has conquered us.”

Many today remember Bonhoeffer for his radical Christian discipleship and sacrificial involvement in the German resistance movement against Hitler. However, few know him for what he believed was most central to his life and ministry: nourishing the body of Christ through the proclamation of the Word. Bonhoeffer cared deeply for the spiritual life and health of the local church, serving in various pastoral roles in Germany, Spain, England, and America. He even wrote his doctoral thesis—Sanctorum Communio—on the church as a holy community.

The sermon showcases Bonhoeffer’s masterful pastoral instincts. He speaks into this atmosphere of angst and uncertainty with a message of hope—a message the church still needs to hear and re-proclaim today, because no human is beyond fear’s reach. We’ve all encountered its many faces:

“. . . fear of an important decision; fear of a heavy stroke of fate, losing one’s job, an illness; fear of a vice that one can no longer resist, to which one is enslaved; fear of disgrace; fear of another person; fear of dying.”

Fear fills us with loneliness, hopelessness, and desperation. It drives us to decisions and actions that undo us.

How does fear do it?

“It hollows out [our] insides, until [our] resistance and strength are spent and [we] suddenly break down. Fear secretly gnaws and eats away at all the ties that bind a person to God and to others, and when in a time of need that person reaches for those ties and clings to them, they break and the individual sinks back into himself or herself, helpless and despairing.”

Fear pollutes our thinking, distorts our judgment, cripples our resilience to evil, dislodges our love, and casts a gloom over our hearts. When fear dominates, then distrust, hatred, and selfishness separate us from our Creator and our neighbor, replacing what unifies us: faith, trust, love.

“Fear takes away a person’s humanity. This is not what the creature made by God looks like.”

Millions of Germans allowed fear to erode their humanity, turning from trust in God to trust in a maniac, from love of neighbor to holocaust and war.

Fear has the same power today. We still face the everyday fears that characterize a broken world, in addition to the fears that accompany a tense election year. While the current social and political climate of the US may not be as extreme as that of Germany in the early 1930s, sensitive church leaders can’t help but notice the fear that pervades the current election cycle: a cycle fraught with threats of terrorism, loss of religious freedoms and values, and the risks of immigration. Congregations sense it, fear it, and may even fuel it.

“Strangely Enough, All of Us Are at Sea Again”

Fear doesn’t discriminate; it knows no boundaries of time or place.

We often find ourselves in tempestuous waters—yet so did Christ’s disciples, Bonhoeffer tells his listeners. He reads Matthew 8:23–27, ending with Jesus’ commanding of the storm that terrorized his disciples: “And he said to them, ‘Why are you afraid, you of little faith?’ Then he got up and rebuked the winds and the sea; and there was a dead calm.”

When all hope vanishes, when fear enters the boat, Christ manifests his presence and power over fear.

The disciples’ story is our story, too.

“We were along on that voyage, weren’t we? And the call, ‘Christ is in the boat,’ was once our salvation too. And now, strangely enough, all of us are at sea again, on that voyage without faith, without hope, overwhelmed, in chains, in bondage, paralyzed by fear; we have lost heart, lost the joy of living.”

Christians are not exempt from storms in life: in fact, fear targets believers more than anyone else.

“When Christ is in the boat, a storm always comes up. The world tries with all its evil powers to get hold of him, to destroy him along with his disciples; it hates him and rises up against him. Christians surely know this. No one has to go through so much anxiety and fear as do Christians.”

This is why, Bonhoeffer insists, we so desperately need the church. The church is where we hear the voice of Christ calling to us, saying, “I am in your boat!” Without it, we’d listen to other voices: voices telling us there is no hope, no way out. Voices telling us to channel our fears for wretched ends. Voices telling us to rest our hope in men, revolutions, or in ourselves.

“But look here, right in the middle of this fearful world is a place that is meant for all time, which has a peculiar task that the world doesn’t understand. It keeps calling over and over but always anew, in the same tone, the same thing: Fear is overcome; don’t be afraid. In the world you are frightened. But be comforted; I have conquered the world! Christ is in the boat! And this place, where this kind of talk is heard and should be heard, is the pulpit of the church. From this pulpit the living Christ himself wants to speak, so that wherever he reaches somebody, that person will feel the fear sinking away, will feel Christ overcoming his or her fear.”

The church is a lighthouse in our storm of fears, guiding us away from the rocks with a beaming light pointed at Christ.

When we’re overwhelmed with fear, our tendency is to isolate ourselves. But according to Bonhoeffer, “the call of the church” directs us to “suffer and make our way through together with Christ, looking always to him who is with us in the boat.”

“Yes, Thy Will is Being Done”

When our faith is weak, the church reminds us that it’s not the strength of our faith that carries us through our fears, but the strength of our Savior. In moments of despair, when we believe God has left us and no longer cares about the chaos in our lives, the church “takes the cross and places it before our eyes and asks: Did God abandon him? And since God did not abandon Jesus, we will not be abandoned by God, either.”

“The human being doesn’t have to be afraid; we should not be afraid! . . . We know that there is hope, and this hope is called: Thy will be done, yes, thy will is being done.”

The church reminds us of God’s good purposes for our lives, his love for his children, and his power to overcome fear and evil. It tells us truth we don’t usually want to hear but so desperately need, offering an alternative to indulging and following our fears.

If there is no storm in our lives at the moment, Bonhoeffer says to hold tight, because dark clouds are always forming. But fear not: God has given us all we need to withstand it.

“The Bible, the gospel, Christ, the church, the faith—all are one great battle cry against fear in the lives of human beings.”

And when fear hits, when we feel alone and helpless, the church will remind us that Christ is in the boat. Then together, we will stand in wonder and declare: “What sort of man is this?”