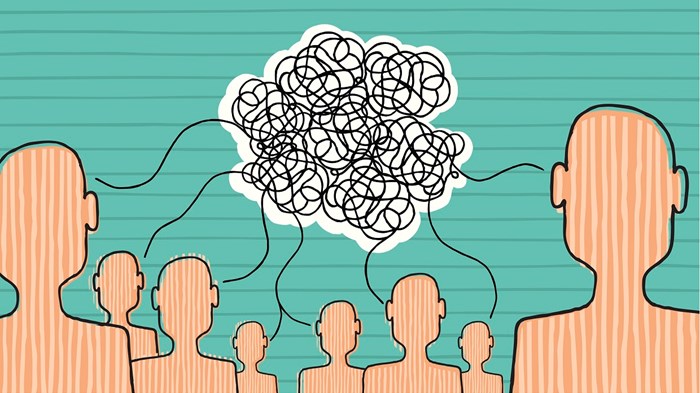 A few years ago, a friend, who was a successful insurance agent, invited me to attend a high-end luncheon. The hotel ballroom was filled with a few hundred insurance agents from around the region. After lunch was served, a prominent leader in the insurance industry spoke, joking about “claimants,” “negligence,” and “aggregate limits of indemnity.” While the other agents laughed, nodding in agreement with the speaker’s comments, I fidgeted in my seat. I appreciated my friend’s invitation and ticket to the lunch, but I left feeling unintelligent and confused.

Every group, if it’s together long enough, develops insider language. The luncheon I attended used insider language targeted to their specific industry. They didn’t use it to be exclusionary; they employed it for the sake of identity, clarity, and efficiency. But I realized—in maybe the clearest manner in my life—what happens in the hearts and minds of visitors and spiritual sojourners when we use insider language in a local church.

My experience at the lunch brought to mind the biblical story of Zaccheaus the tax collector. What prompted Zacchaeus to climb a tree and become immortalized in that Sunday-school song you’re probably humming in your head right now? “He wanted to see who Jesus was, but because he was short he could not see over the crowd” (Luke 19:3). In their pursuit of Jesus, the crowd blocked Zacchaeus (and maybe others) from seeing and experiencing Jesus.

We do this too when we use church-specific language. Call it the “Zacchaeus Effect.” Is it at play in your church?

“I just want to love on people.”

“Pray the prayer and walk the aisle.”

“God laid it on my heart to tell you something.”

Ask someone with no church experience what it means to “feel called” and they might think you’re referring to the phone vibrating in their pocket. Ask those outside the church what a love offering is, and they might honestly think it’s a sexual euphemism. I’ve been a pastor for over 15 years, and I still don’t know exactly what people mean when they sign off from an email with “Be blessed.”

Could it be that, in our pursuit of Jesus, we may be blocking others from seeing him?

We also use phrases from Scripture with the assumption that everyone has the same level of biblical literacy. Being healed “by the blood of the Lamb” or giving your “tithes and offerings” are alien expressions to outsiders. At a party several years ago, someone shared “God told me …” A friend pulled me aside to ask, with sincerity, “When God spoke to her, was his voice deep? Did it sound anything like Morgan Freeman’s?” If my friend’s question sounds funny or strange, it might mean we’ve become too accustomed to insider church language. Could it be that, in our pursuit of Jesus, we may be blocking others from seeing him?

The hazards of church jargon

God’s grace is available to any and all who desire it. According to Jesus, the kingdom is like a banquet catered to outsiders who don’t think they belong. Jesus didn’t just invite them in; he prioritized and celebrated them.

This is why we have to be aware of the hazards of using Christian insider language.

For church outsiders, our worship gatherings can be like watching a foreign film without subtitles. Our insider language confuses those who aren’t the regulars, and when people are confused they tune out.

We invite people to “accept Jesus into their hearts” (a phrase not found in Scripture) or we say, “Before we worship, let’s pray,” as if prayer is not a form of worship. Perhaps we begin our Sunday service with “Spirit, we invite your presence here this morning.” May we never forget that the Holy Spirit is already among us, inside every believer. If we are not careful, our language can communicate things to others we don’t actually want to communicate.

It takes intentional work to think about our language in a way that invites people in rather than locking them out. So let’s put in the required effort to communicate the most important Story we can tell people.

How to kill Christian jargon in your congregation

If we want to eliminate language that blocks others from seeing Jesus, what can be done?

1. Scrutinize your language as a team.

To avoid the Zacchaeus Effect, start by noticing when you use Christian insider language—and who is around when you use it. We must name things to change things, which requires awareness. I often ask my staff and leadership teams, “What phrases do we use that we assume people understand?” By answering this question, our team has learned to speak differently to make sure we aren’t using code language around people who aren’t insiders.

Things we said in our services without a second thought were, to him, confusing, frustrating, and even humorous.

Several years ago, I asked a friend, who had little interest in spiritual matters, if he would attend one of our services and answer this question with complete honesty: “What do we say in our church that doesn’t make sense to you?” Never one to back down from a challenge, he accepted. Later that week, I treated him to lunch and asked about his experience. His response was eye-opening, to say the least. Things we said in our services without a second thought were, to him, confusing, frustrating, and even humorous. It was one of the best investments in a meal I’ve ever made.

Discovering and laying to rest our Christian jargon doesn’t have to be a dreary funeral procession. Yes, it’s humbling and convicting to confront the barriers we’ve placed between us and others, but we all do it, and God’s grace covers our shortcomings.

Come up with a list of “churchy” words you’d like to use less often. Then ask a group of key leaders, “How could we say _____ in a more compelling and accessible way?” Make it fun by creating a round of “Lingo Bingo.” Hand your leaders a blank Bingo card and ask them to write down the most common words and phrases they hear from the front of the church in a typical service. After they’ve filled in their Bingo cards, discuss the results as a team.

The solution to church jargon isn’t always to replace significant words with common phrases. Sometimes a short explanation will do. By assuming everything I say during a service will be heard by people who are not church insiders, I must occasionally press pause to explain what I mean when I use certain words.

Many people have never heard words like atonement, justification, or resurrection—at least not in the way we mean them. Howard Hendricks used to tell his seminary students, “If it’s a mist in the pulpit, it’ll be a fog in the pew.” By taking the time to explain insider concepts, we can remind regular attenders that there are people among them who don’t know these terms.

I’m not arguing that we water down the good news of Jesus Christ by softening our language, nor that we kowtow to political correctness. I’m not suggesting we throw out our inherited language to make it sound sexier. Instead, I’m advocating for something more important: infusing our language with intentionality, clarity, accessibility, and imagination. We have the opportunity to inculcate clear and accessible language into the minds, hearts, and souls of our congregations so they will understand that the message of Jesus is available to all people.

Language matters: “In the beginning was the Word, and the Word was with God, and the Word was God” (John 1:1). It is a sacred gift, meant to bring about information and intimacy. Words are the brushes with which we paint the story of God on the canvas of our context. Don’t take for granted the words available to you. Use them clearly and discerningly. Steward them wisely and compellingly.

If we eliminate church jargon and replace it with better phrases, then others won’t have to scale trees to catch a glimpse of Jesus’ good news. Instead, they can stand with us, side by side, worshiping Jesus together.

J. R. Briggs is the founder of Kairos Partnerships and pastor of The Renew Community, in the greater Philadelphia area. Find him on Twitter at @jr_briggs.

Join the conversation on Facebook
Tags:
CommunicationCreativityInternationalMissionsRelationshipsTeachings of Jesus
Posted:September 19, 2017

END_OF_DOCUMENT_TOKEN_TO_BE_REPLACED
Already a subscriber? Log in
Read These Next