Douglas Campbell’s new big book, Pauline Dogmatics, with its wonderful subtitle The Triumph of God’s Love, keeps its eyes on the realities of what Paul was saying and how what Paul was saying works out in world, and no where is this more clear in this book than in his focus on churches as “learning communities.”

We have learned already that God has reestablished his plan, which is the goal of fellowship with us all. God is a personal God and desires to commune with us as persons. Our next step then surely consists of getting on with effecting this plan. But what does this look like?

Hence, at bottom, when we think about what God’s sweeping cosmic vision looks like concretely, on the ground, as we are actively involved with it now, we can see that God is in the business of nurturing and fournding (further) communities.

So a community of people is necessarily a relational phenomenon, and consequently the church is all about its relationships. Relationships are what matter, and they are relationships of love. 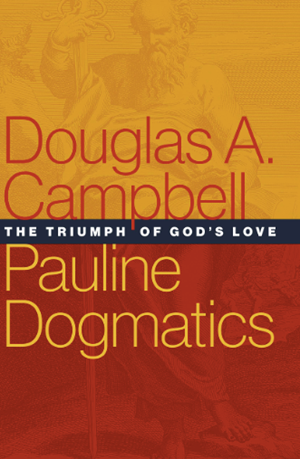 Campbell develops a graph of motion: God’s Plan is an eternal relational communion and it immediately works out to found relational communities and nurturing relational communities, with the latter having a structure and a kind of relational tenor. This emphasis of his on relationality is strikingly valuable. NT Wright, for instance, focuses on reconciliation, which is part of this relationality theme. But what is so noticeable in Pauline theology is his ethics, and Campbell gets to this later. Those ethics are about relational ethics and not something abstract or theoretical morality.

It turns out that Pauline communities are all about learning, and ultimately about learning in a particular way – a mediated way, we will be unsurprised to find. It might not be exaggerating too much to say that much of the Protestant tradition has lost its way badly at just this moment, although I am not ultimately going to let Catholics or the Orthodox off the hook here either. Paul’s communities are laboratories of relationality. They are designed to teach and to enhance the right sort of relating.

We have been created to love God with all our hearts, souls, minds, and strength, and to do so freely, without coercion. And this is where our true freedom resides, in this relationship, where it stays freely, and where it can grow as we learn to love God more and more.

A major theme for Campbell, one that he intuits and theologizes to, is freedom and he is a strongm critics of Western, American “liberalism’s” understanding of freedom (from):

The prevailing US definition of freedom cripples real freedom.

However,rather than holding on to the insight that relationships should be intrinsically free and loving – or at least respectful – and not characterized by bullying and coercion, liberals tend to think about “freedom from” as a space that individuals need to be able to live in, where they can operate unconstrained by anythng. To be free in the sense of liberatedis to be free from any relationships at all, a position that arguably resolves definitively the problem of tyrannical intrusion by a government or by any other entity.

The broader universe is generally being understood here by liberals in the zero-sum terms.

He enters into discussions then of freedom and rights and a circle free from invasion by others. We have then some kind of private free space, leading to this his big idea:

The notion that people are truly free from tyranny when they are free from any outside influence launches a damaging and self-defeating ethical and political program. It absolutizes a non- and even an antirelational account of the person – the individual – which entails the elimination on ideological grounds of the very influences that a person needs in order to be a healthy and good person! A clearer case of the baby going out with the bathwater is harder to imagine.

What is freedom then but living in relationality with God and God’s people on earth in embodied ways? He concludes then with this:

We have been created to love God with all our hearts, souls, minds, and strength, and to do so freely, without coercion. And this is where our true freedom resides, in this relationship, where it stays freely, and where it can grow as we learn to God more and more.

Join the conversation on Facebook
Tags:
None
Posted:
April 2, 2020