History has a goal, discerning where we are requires wisdom
Scot McKnight

Where is history headed? Where’s the road going?

There is something called “attribution theory,” and I bumped into this expression a couple decades back in reading about conversion theory. It comes from psychology and concerns attributing feelings and motives to others. Some people attribute a motive of God to events that, from the angle of others, boggles. Still, on and on some people go knowing exactly why God sent the COVID-19. But this is not about the virus. This post is about discerning the hand of God in history.

I’m wondering too if there is not also among many Christians an anti-attribution theory that empowers such persons to say “We have no idea what’s going on and it’s not our calling to know such things.”

In Lee Camp’s Scandalous Witness his opening chapter is about history not being “one damn thing after another” (I’m using his oft-repeated expression and I do wonder if the sweepers at CT are going to delete that), but it’s his and I’m quoting. So be it.

Hope is the Christian interpretation of history.

Christians have developed over time some peculiar attitudes toward history and toward mundane national or international realities.

Many Christians also think this: “It’s all going to burn, and none of this matters.” What matters, they say, is the human soul "going to heaven when we die” No need to concern ourselves with troubling social or political matters because “God’s got this.” Poli-tics and social affairs are of no concern to the faithful.

Many Jews, Muslims, and Christians know better. Some prominent early Christians, in fact, believed such spiritualizing to be a grave heresy that would destroy the Christian faith. They saw human history as the stage for the unfolding of the drama of God’s work. In this drama God was assured to be the victor, even if God’s ways are often inscrutable, even exasperating to those who love God. This God who had created a good creation would restore it, redeem it, save it. This God would set right the injustice and violence, remove the arrogant mighty ones from their throne rooms and White Houses, fill up the hungry, and bind up the oppressed. 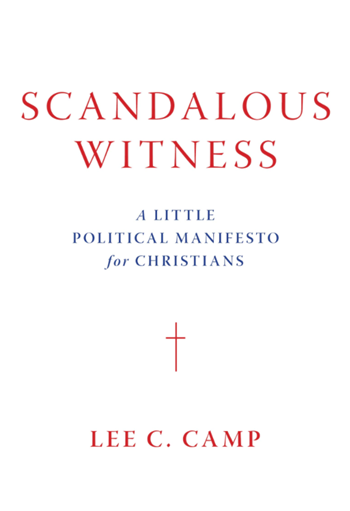 How can a Christian be such and not think God is at work in history moving history – inscrutable at times to be sure – toward its ultimate goal? Camp writes about Edvard Munch’s famous painting “The Scream” as how some “read” history.

Instead, history has a direction: injustice undone, brokenness bound up, captivity taken captive. This is the goal of history, the end of history. We need not confuse “end of history”with the termination of time; it is, rather, best considered as the final goal toward which all things are moving.

Here is then his radical attribution: Hope is the Christian interpretation of history. Progress? Yes. Everything descending into the Pit? Hardly.

Notice the overlap of a Christian theory of hope with progressivism’s hope:

If it is true that Christianity does proclaim that history matters and is going somewhere, then it turns out that many Amer-can and secularist forms of hope are more Christian than the otherworldly dreams of some Christians. Or, at a minimum, we can say that such Americans and secularists are more Christian in their conviction regarding the immeasurable worth of the whole of human history.

NT Wright often opines against Progressivism’s theory of history but Camp seems to suggest that Progressivism has it right: there’s motion toward but the Christian theory has a different Goal in mind. So…

When Americans and secularists insist that history matters – that social policy and scientific concern for the earth matter, that economic policy and staggering disparities in wealth matter, that the industrialization of war and imprisonment for profit matter –- they show themselves, in this regard, more Christian than many Christians.

This statement, then, is stunning. What does this say about so many eschatiological timelines and maps and their formative impact on America’s conservatives?

He doesn’t fall into the trap that, “Well, then, let’s all be Progressives and we’ll make this world a better place. Let’s be significant.” No.

One of the failings of the secularist notion of progress is its vague lack of content: What does progress entail? What does it look like? What is its content?

History, the mundane and the momentous, matter. We are living in much that is mundane right now but is it mundane? What matters?

The great paradigmatic moment of political encounter in the founding narrative of the Christians comes with the gospel: "Change, and believe in the good news of the reign of God.” This new political movement of God would entail specific practices mlike those of the nations, unlike those of the powers whom we have falsely assumed have the monopoly on political power. This new political movement would offer the world something at which kings and rulers would shake their heads: love of enemies, practices of reconciliation, sharing of wealth, honoring of marriage, renunciation of our varied practices of greed and lust, and an embrace of all the practices of life and mercy and kindness.

Where is our attribution theory now?

Join the conversation on Facebook
Tags:
None
Posted:
April 22, 2020