Take your pick: the SBC church scandals revealed in newspapers, the Roman Catholic curia as told by journalists, or local churches like Willow Creek or Harvest Bible Chapel. What revealed the culture of those in power was how they responded to a variety of allegations – from abuse of power to abuse of women to abuse of money.

Laura Barringer and I, in our book coming out in October with the title A Church called Tov (tov means good, goodness), investigated the variety of false narratives, or lies, churches tell. They tell these stories to protect and preserve power, to protect the brand and reputation, and sometimes they tell these narratives for no other reason than revenge. Tell them they do. Too often.

Our book is written for church people and leaders and we are hoping they will read it together and have long culture-forming conversations. We want to help churches work on forming a “church called tov,” or a goodness culture forming in churches.

Boz Tchividjian, nothing less than an expert on toxic cultures in churches, developed in an RNS article the following false narratives:

False narratives suppress truth, promote darkness, and eviscerate lives. Should they be acceptable in a faith that is centered upon the One who calls Himself truth, light, and the giver of life?

He’s right: those who follow the Way, the Truth, and the Life are called to be truth-tellers.

I got into this project with Laura in part because I have studied how German pastors responded to their complicity in the Holocaust. They denied complicity. Very very few called the German church and the “German Christians” to repentance, and one who did was Martin Niemoeller (who was the American church’s posterboy for the good German church leader after the war). 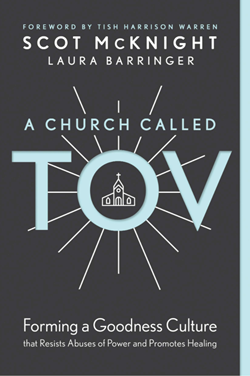 So I was on the look out for false narratives in the churches mentioned above, and so Laura and I developed eight narratives – building on Boz but developed independently as we had these developed before Boz’s article came out, but he clarified our thinking even further. Ours are particularly focused narratives, and they of course overlap and churches often use more than one of these.

No matter who you are and what church you are in, these narratives are lies designed to prevent the truth from being told.

Leaders sit around and figure which ones will work in their context and then crumple up the true stories so they can be tossed in the rubbish bin.

These false narratives rewound the victims.

These false narratives corrupt the heart of the church.

Join the conversation on Facebook
Tags:
None
Posted:
August 3, 2020