Schools are starting and stopping, students staying home, moms and dads working out plans, churches resuming gatherings with protocols … as we wait and hope for the medical community to help us all. Life under COVID-19.

On Monday I will meet with students in our new 2020 MANT cohort and I’m looking forward to a new cohort, and each one is special and unlike all the others. Each forms into a personality of its own.

No singing, but what about humming?

Amy is still in that choir today.

But they've had to stop singing during the pandemic. Singing, even words of inspiration, propels aerosol droplets that can carry COVID-19 particles. It is especially incautious in close confines, including the spaces of a church.

Services have resumed at Freeville United Methodist, and Amy says the parishioners scrupulously observe guidelines from the State of New York. They sit six feet or more apart from one another. They wear masks at all times. There are no bibles, church bulletins, or hymnals in the pews, and — of course, no choir singing out — which could risk spraying out potential infection.

But one Sunday, says Amy Dickinson, the 20 or so members of her small congregation began to hum their masked and wordless performance of the hymn, "He Touched Me."

"We are humming behind our masks," Amy explained as she sent along the music, "and it is the most heartbreaking and beautiful thing I've ever heard... It feels frustrating to hum, but the softness of it means that you are sort of sinking into the quiet and the sadness of it all."

Why can’t the Parties understand one another?

During a TED talk a number of years ago, Haidt shared his discovery that contrary to the idea that humans begin as a blank slate—“the worst idea in all psychology,” he says—humans are born with a “first draft” of moral knowledge. Essentially, Haidt argues, humans possess innate but malleable sets of values “organized in advance of experience.”

So if the slate is not blank, what’s on it?

To find out, Haidt and a colleague read the most current literature on anthropology, cultural variations, and evolutionary psychology to identify cross-cultural matches. They found five primary categories that serve as our moral foundation:

1) Care/harm: This foundation is related to our long evolution as mammals with attachment systems and an ability to feel (and dislike) the pain of others. It underlies virtues of kindness, gentleness, and nurturance.
2) Fairness/reciprocity: This foundation is related to the evolutionary process of reciprocal altruism. It generates ideas of justice, rights, and autonomy. [Note: In our original conception, Fairness included concerns about equality, which are more strongly endorsed by political liberals. However, as we reformulated the theory in 2011 based on new data, we emphasize proportionality, which is endorsed by everyone, but is more strongly endorsed by conservatives.]
3) Loyalty/betrayal: This foundation is related to our long history as tribal creatures able to form shifting coalitions. It underlies virtues of patriotism and self-sacrifice for the group. It is active anytime people feel that it's "one for all, and all for one."
4) Authority/subversion: This foundation was shaped by our long primate history of hierarchical social interactions. It underlies virtues of leadership and followership, including deference to legitimate authority and respect for traditions.
5) Sanctity/degradation: This foundation was shaped by the psychology of disgust and contamination. It underlies religious notions of striving to live in an elevated, less carnal, more noble way. It underlies the widespread idea that the body is a temple which can be desecrated by immoral activities and contaminants (an idea not unique to religious traditions).

What Haidt found is that both conservatives and liberals recognize the Harm/Care and Fairness/Reciprocity values. Liberal-minded people, however, tend to reject the three remaining foundational values—Loyalty/betrayal, Authority/subversion, and Sanctity/degradation—while conservatives accept them. It’s an extraordinary difference, and it helps explain why many liberals and conservatives in America think “the other side” is bonkers.

Pope Francis appointed new members to the Vatican's Council for the Economy on Thursday, and in addition to several cardinals, he also added seven new laypeople to the committee. Six of them are women.

The historic move means there are more senior female officials serving the Vatican than ever before.

These new appointees all have finance backgrounds.

The pope created the Council for the Economy in 2014 "to supervise the economic management" and "administrative and financial activities" of Vatican institutions, according to Vatican News.

A total of 15 members sit on the council — eight of whom are cardinals and bishops, "so as to reflect the universality of the Church." "The other seven are experts of various nationalities, with financial expertise and recognized professional credentials," according to Vatican News. 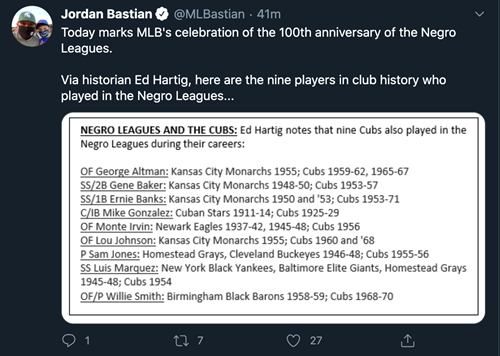 Many steps too close:

Greenland’s ice sheet has melted to a point of no return, and efforts to slow global warming will not stop it from disintegrating. That’s according to a new study by researchers at Ohio State University.

“The ice sheet is now in this new dynamic state, where even if we went back to a climate that was more like what we had 20 or 30 years ago, we would still be pretty quickly losing mass,” Ian Howat, co-author of the study and a professor at Ohio State University, said.

Greenland’s ice sheet dumps more than 280 billion metric tons of melting ice into the ocean each year, making it the greatest single contributor to global sea level rise, according to Michalea King, the lead author of the study and researcher at Ohio State University.

The ice loss has been so massive in recent years, she said, that it has caused a measurable change in the gravitational field over Greenland.

Ice melting in Greenland contributes more than a millimeter rise to sea level every year, and that’s likely to get worse. Sea levels are projected to rise by more than 3 feet by the end of the century, wiping away beaches and coastal properties.

Coastal states like Florida, and low-lying island nations are particularly vulnerable. Just 3 feet of sea level rise could put large areas of coastline underwater. Forty percent of the US population resides in coastal areas that are vulnerable to sea level rise.

The thought of packing herself onto a crowded bus or train makes Magali Olson cringe.

"I'm afraid to really take the train," Olson says. "I mean, I don't know if people are being clean or not, you know?"

She is able to work from home some days, but she's had to ride Chicago's Blue Line trains two days a week to her job at an insurance company downtown.

"Although I had Clorox wipes to clean everything, before I sat or touch anything, I was still a little scared," she says. "Some people weren't wearing masks, so it's a little scary."

Like other transit systems, the Chicago Transit Authority requires riders to wear masks and frequently and thoroughly cleans trains and buses. But like many Americans during this pandemic, Olson is still uncomfortable riding public transit, so she went out and bought herself an electric scooter….

Scooters are just one of the transportation modes increasing in popularity among commuters during the pandemic, which is changing how many of people get around. Another of the two wheeled variety is the good old bicycle. But if you don't already have one, it's going to be difficult to find one.

Give it up for some silence:

Silence. Some of us welcome it. For others, the thought of sitting in silence is enough to make their skin crawl.

How much you value silence may depend on where you are on the introvert/extrovert scale. But whether you can work a crowded room with ease or are a self-proclaimed homebody, silence should be a part of your day. Clinical health psychologist Amy Sullivan, PsyD, ABPP, offers reasons why it’s important, plus how to get started.

Silence offers opportunities for self-reflection and daydreaming, which activates multiple parts of the brain. It gives us time to turn down the inner noise and increase awareness of what matters most. And it cultivates mindfulness — recognition and appreciation of the present moment.

“When we’re frazzled, our fight-or-flight response is on overload causing a host of problems,” says Dr. Sullivan. “We can use calm, quiet moments to tap into a different part of the nervous system that helps shut down our bodies’ physical response to stress.”

That means, being still and silent can help you:

PROVIDENCE, R.I. (WPRI) ─ Pizza lovers may soon have to skip the pepperoni.

Pizza shops across the country, according to a report from Bloomberg, are reporting higher prices and a tight supply when it comes to America’s favorite pizza topping.

Two main reasons cited for the pepperoni shortage include the lack of employees at pork processing plants and a high demand for pizza, both of which are likely caused by the coronavirus pandemic.

Like many businesses, pork processors have had to lay off hundreds of employees in order to cut costs due to the pandemic, forcing them to streamline operations.

So far, larger pizza chains haven’t been impacted by the shortage since they buy their ingredients through long-term contacts, according to Bloomberg.

What’s in it? Let’s get Geraldo!

Barre, N.Y. — Residents of a small town in upstate New York have two questions on their minds: How did a giant safe end up in the middle of a farmer’s field and what could be inside?

The safe mysteriously appeared in a field on Kirk Mathes’ farm in Barre, New York, reported WHAM. The safe had a note attached, saying whoever could open it could keep what’s inside.

“It could be holding millions of dollars. It could have confetti in there,” said Cindy Vanlieshout, of the Barre Betterment Committee. “You have no idea.”

Locals and authorities alike have tried — and failed — to crack the safe.

“They took a sledgehammer to it, knocked off the dial and handle,” said Mathes. “They worked on the hinges, kind of beat it up.”

Mathes, who was out of town when the safe was discovered in his field, said he doesn’t know who left it there. But he now plans to hide it, saying it’s more fun to leave it locked.

“If you open it, the show’s over,” he said. “In these times, with the virus and the politics, it might give people a chance to set their problems or troubles aside and have a lot of fun talking about it.”

Join the conversation on Facebook
Tags:
None
Posted:
August 22, 2020