The church doesn't "have" a mission. It is missional.
Scot McKnight

Here are Franke’s major thematic stones on which he rests his case:

God is love.
God is a missionary God.
Difference and otherness are part of the divine life.
The love of God is not an assimilating love.
Creation is a manifestation of the expansive love o[ God.
Human beings, created in the image of God, have rebelled against the love of God.
Jesus is sent into the world to bring about salvation.
The Spirit is sent into the world to call: guide, and empower the followers of ]esus to continue his revolutionary mission.

On which a missional theology rests:

These commitments provide the theological background for understanding the mission of the church, which is a community sent into the world as a continuation of the mission of God. As Jesus is sent, so he sends the church as a sign, instrument, and foretaste of the kingdom of GOd. As such, the historical and contemporary embodiments of the church are local outposts of God’s universal mission.

The challenge to this Jesus-shaped missional life for churches is forming today’s Christians into a community instead of an aggregate of individuals (and individualists), which is largely the color of water for modern people. Leading Franke to sketch three points to what a community is:

First, a community consists of a group of people who are conscious that they share a similar frame of reference.
Second, a sense of group focus appears to be present in all communities.
Finally, the group orientation of a community leads members to draw a sense of personal identity from the community. 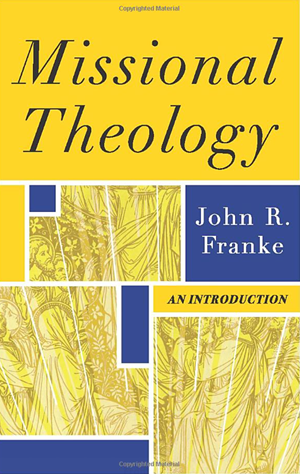 Franke develops the church as the kingdom community in this world though he operates more with a classical distinction between church and kingdom (and the latter is largely undefined from its ancient usage). His view is common and helpful. The church is a sign, an instrument, and foretaste of the kingdom. This expresses much of it clearly:”

As the church follows the pattern of Jesus, proclaiming the gospel of the kingdom and God’s love for all people and calling on those who hear this good news to repent of sin and become disciples of Jesus, a new way of life in the world is envisioned and established. This leads to the formation of a new community, a welcoming and inclusive community that lives the love of God for the world and transcends the divisions that are so often used to exclude people from the blessing and peace of God’s kingdom. As the church pursues and embodies this inclusive vision of new community through gospel proclamation and discipleship in the way of Jesus, it bears the image of God as a sign of God’s kingdom.

He develops this more as an instrutment, and appeals to Luke 4:16-30 as the message of liberation of all from all that enslaves, and so he also turns to Matthew 25:31-46 and James 1:27 as crystallizations of the church as kingdom mission. Many neglect grace and Spirit and turn such kingdom vision into ethics and social activism. Not Franke: the church is the dwelling place of the Spirit and only in the Spirit’s power does the church do its calling (its mission).

Here’s a problem: the church’s “missionary” work has not been sufficiently missional.

The missionarv expansion of the church has frequently been an exercise in the extension of empire through the process of colonization and has used the Bible as a justification for this activity, beginning with the establishment of the church in the Roman Empire.

Which means Christendom, a word often used for what someone doesn’t like. Not so with Franke, and I like this definition:

Christendom, a system of church-state partnership and cultural hegemony in which the Christian religion maintains a unique, privileged, and protected place in society, and the Christian church is its legally and socially established institutional form.

The church as missional can’t be Christendom.

Join the conversation on Facebook
Tags:
None
Posted:
December 15, 2020