We suggest they were baptized in mikvahs south of the temple.
Scot McKnight

One of the fascinating new scenarios our tour guide (Yoni Gerrish) brought to light concerned where the Christians were on the Day of Pentecost and where the baptisms could have occurred when 3000 suddenly were in need of baptism.

It takes a lot of water, or at least time, to baptize that many.

“Fellow Israelites, I may say to you confidently of our ancestor David that he both died and was buried, and his tomb is with us to this day. Since he was a prophet, he knew that God had sworn with an oath to him that he would put one of his descendants on his throne. Foreseeing this, David spoke of the resurrection of the Messiah, saying,

‘He was not abandoned to Hades,

nor did his flesh experience corruption.’

This Jesus God raised up, and of that all of us are witnesses. Being therefore exalted at the right hand of God, and having received from the Father the promise of the Holy Spirit, he has poured out this that you both see and hear. For David did not ascend into the heavens, but he himself says,

‘The Lord said to my Lord, “Sit at my right hand, until I make your enemies your footstool.” ’ Therefore let the entire house of Israel know with certainty that God has made him both Lord and Messiah, this Jesus whom you crucified.”

Now when they heard this, they were cut to the heart and said to Peter and to the other apostles, “Brothers, what should we do?” Peter said to them, “Repent, and be baptized every one of you in the name of Jesus Christ so that your sins may be forgiven; and you will receive the gift of the Holy Spirit. For the promise is for you, for your children, and for all who are far away, everyone whom the Lord our God calls to him.” And he testified with many other arguments and exhorted them, saying, “Save yourselves from this corrupt generation.” So those who welcomed his message were baptized, and that day about three thousand persons were added. They devoted themselves to the apostles’ teaching and fellowship, to the breaking of bread and the prayers. 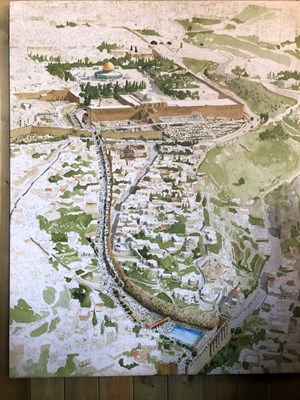 How can you baptize 3000 in Jerusalem in one day? Water is scarce in most of Israel, especially in the Jordan Valley. The nearly perfected approach was cisterns that collected water through a series of small paths or channels, but it is only very remotely possible the first Christians were baptized in a cistern.

So, how was is possible to baptize so many? I see three possibilities: (1) in the Pool of Siloam at the bottom of the City of David (see picture at bottom), (2) in the pool of Bethesda on the north side of the temple, or (3) in ritual immersion pools called “mikveh” (singular) or “mikva’ot” (plural).

On this photo to the right: I took this of a picture on wall next to the pool Siloam (blue pool at bottom) but the picture oddly is a mix of 1st century walking path and the modern Muslim temple mount (mosque next to the southern wall and the Dome of the Rock, with its golden dome, closer to the northern edge). Kidron Valley is to right of the eastern wall, the Western Wall just to the right of the east-west wall in the middle of the temple area.

If you look at the map here you can see a road from the bottom to the southern edge of the temple (it is the “cardo” and runs along the Western Wall into the area at the top of the temple mount). 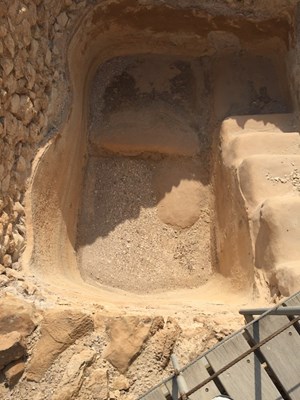 Along that path from Siloam to the temple, and especially along the southern slope of the temple, were as many as 500 mikva’ot.

The picture to the left of a mikveh is one I took three years ago at Qumran. You can see the steps down into the immersion pool so the person could immerse herself/himself. Such mikva’ot were often next to an “unstepped” pool filled with water, which could help create running water from one to the other.

Where did they baptize? Yes, it is very reasonable to think they were baptized in these already-existing and already-about-purity mikva’ot. If you would like to read a solid explanation of the mikva’ot, see E.P. Sanders, Judaism: Practice and Belief, 364-378.

Some 500 mikva’ot means it would not have been difficult to find water for all 3000.

Who baptized them? One can guess that it was (1) Peter and John and the apostles, (2) the apostles and other leaders, or (which is likely) (3) they self-administered their baptism with their own confessions (self administration was how mikveh immersions occurred). What about the babies? (That’s another discussion.)

Where was Peter preaching? Perhaps in that very area, too. Perhaps he was preaching to folks as they were ascending to the temple.