I have taught many undergraduate bible courses over the past couple of years. The feedback that I hear the most from students is, “I have never read the bible this way before.” What do they mean by this? In most college bible courses, even at the undergraduate level, the intention is to offer students a historical/critical approach to studying and reading the bible. The goal is to expose students to the very beginning stages of what theologians refer to as “biblical criticism,” or using methods like history to examine the text.

Here is a simple and generic definition of biblical criticism. It is learning to “look behind the scriptures” to discover the historical background, authors, sources and literary characteristics of it. Biblical criticism also expands itself to establish the original words of the scripture (which is beyond the scope of typical undergraduate bible courses).

Think about sitting down to watch your favorite TV show, either on Hulu, Netflix, or on live TV (if anyone does that anymore). Before you watch the TV episode, you watch the “flashbacks” from the previous episodes and hopefully receive enough information from the entire season to have a good idea of what is about to take place in the current episode. In others words, you take in the background information before you watch the show. If you watch a random episode in the middle of the season, of a TV show that you have never seen before, and without any of the background knowledge, you would likely be very confused.

This is what it is like to read the bible without any knowledge of biblical criticism. Reading the bible with no knowledge of its history, authorship, culture, sources or literary characteristics will give you a very limited understanding of the bible. Without any sort of biblical criticism, you will have a limited perspective on what you are reading. And there will be lots of things you miss.

This process of learning to think critically about scripture can be disorienting for some and outright offensive to others. But without it, we can get into some really deep trouble when it comes to interpreting the bible. Biblical criticism is an important piece in the conversation around many issues of interpretation, including women in ministry/leadership.

For example, what if we used biblical criticism as we read 1 Timothy 2:11-12:

A womanshould learn in quietness and full submission. I do not permit a woman to teach or to assume authority over a man; she must be quiet.For Adam was formed first, then Eve. And Adam was not the one deceived; it was the woman who was deceived and became a sinner. But women will be saved through childbearing—if they continue in faith, love and holiness with propriety. 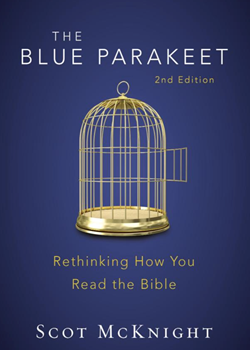 If we were to read this passage with some understanding of biblical criticism we would see this:

If you were in one of my bible classes, I would say: “Now, knowing these facts about the scripture, go back and re-read it.” Then we would talk about how knowing the historical context influences how we read the text, and therefore, how we interpret it. This is biblical criticism.

Without biblical criticism, we are left with a “flat reading” of scripture. It is this “flat reading” that leads many churches today to still insist on the subordination and silence of women in the church, (similar to the Church’s support for segregation during the Civil Rights Movement.) Both racism against black Americans and sexism prohibiting women from preaching/leading are both principles drawn straight from the bible.

But the truth is, this is not the Bible’s fault. The scriptures were written, and always intended to be interpreted within the culture and context of the church. Jesus did this. Paul did this. Peter did this. And so must we. We must insist on a critical and historical approach to reading the scriptures as we engage in dialogue around women in ministry.

If we do this, we will see that Paul in this passage, was not prohibiting women from preaching/teaching/leading in the church. Instead, he was advocating for women to learn first, to educate themselves. His words about their silence were not prescriptive blanket statements for us to take literally in 2020 in regards to women leaders. Good luck trying to keep all women quiet in all areas of church ministry anyway! In the same way, we are not prescribed to greet one another with a holy kiss today or to cover our heads in church today. Nor do we believe that women are saved through child-bearing. These are all things born of the culture and time in history in which Paul writes. It is time for the church to love the bible enough to look behind the text and to think critically about it. It is time for the church to interpret the bible for our culture and context. It is time to watch the “background episodes,” and to do the investigative work for the liberation of all people and the building up of the Body of Christ. This is our role as the church. It’s time to get to it.

Join the conversation on Facebook
Tags:
None
Posted:
February 26, 2020