Romans, in our day, needs to be read from the back to get the full message.
Scot McKnight 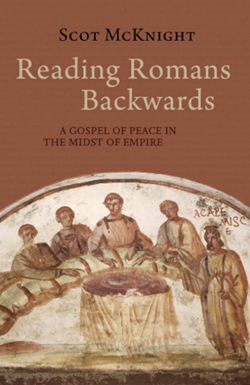 The most common question I get about the not-so-subtle title of Reading Romans Backwardsis Why? And, along with that question, I’m asked How can it be taught that way? Read on.

Second, our readings of Romans, many of which are profound, will lack social realities if we ignore Romans 12-16. Here we encounter the mission of Paul to go to Spain, and Robert Jewett made (too?) much of this. Here we encounter the names of those in the house churches in Rome (16:3-16), and these names have been studied intensely by Peter Lampe and Jewett, revealing both a high proportion of slaves and the prominence of women. Here we encounter Phoebe, and I think she was a leader in a church next to Corinth and was a benefactor of Paul and others.

Most importantly here we encounter the Weak and the Strong. There are debates here, and I took sides, but whichever view one takes there are almost two chapters addressing them (and the same terms are used in 1 Cor, leading some to think the problems are not that different).

How can we read Romans well if we ignore these social realities? I’ve read many studies of Romans who seem to think we can’t bring these Strong and Weak folks into the picture until they get mentioned in Romans 14-15. I can assure you of this: they were sitting there at 1:1 and responding from 1:1 on.

Third, Romans becomes a pastoral, ecclesial letter the moment one learns to read the letter in light of Romans 12-16. It’s not abstract theology, which has its place, but pastoral theology front and center. There’s lament here: 9:3, 10:1, 11:1.

Fourth, once we begin to plumb Romans out of this social reality context we see things we may not have noticed, and one example is Romans 11:13. Why does Paul here suddenly say he’s now talking to the gentile believers in Rome? Was he talking to them from 9:1 on or was that for the Jewish believers in Rome? Once we read Romans this way the issue of reconciliation of two groups of Christians at odds with one another becomes paramount in Romans.

Fifth, I believe once we begin to read Romans in light of 12-16 we see rhetorical moves that otherwise we seem not to see. For instance, and I leave you to see how I work this out in the book, what happens if we learn to read 1:18-32, that sudden shocking accusation from the blue, in light of 2:1 and see it as a piece of rhetorical set up? What if 1:18-4:25 has a focus on the Jewish believers as perhaps does 9:1-11:10?

As for Teaching Romans Backwards? 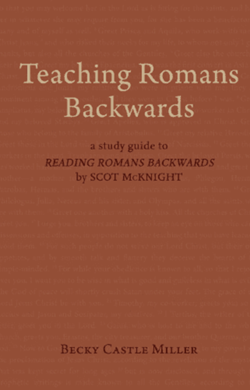 Here’s what Becky does in the plan of this wonderful book:

She creates this guide for 15 week classes but also provides alternative schedules for the guide.
She has “Before Class” and “During Class” and “After Class” tasks.
Group learning activities.
She introduces terms, provides chapter summaries, outlines basic points for each chapter in the book.
Then she has group discussion questions, which is one of her great skills and takes my own book to new levels.
She also has group learning activities – since formation is embodied and not just brain power.
Plus, she includes further resources and further Bible study and personal study questions.

Big bonus: Becky has created a story of Phoebe interacting with Paul as he writes the letter and she responds to what he is saying. So fun to read… and our cohort enjoyed her performance of this story on the shore (on the ruins on the shore) of Cenchraea in Greece.

For teachers, she has quiz questions.