Kingdom is "in" and church is "out," but what's Kingdom?
Scot McKnight 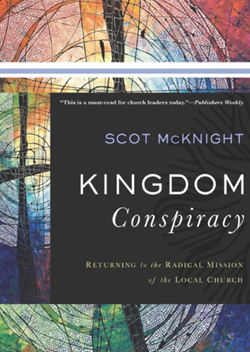 This set of ten themes puts into practice what is written in my book Kingdom Conspiracy. In the book I make a case for what the Bible means when it uses the word “kingdom.”

Here’s the chief conclusion I offer: every time the term “kingdom” is used in the Old Testament (apart from possibly once) it means a nation or a people governed by a king.

Never, and on this there is not a debate, does it mean “salvation” or “working for justice among the Gentiles.” In other words, in the references that most concern us the term “kingdom” refers to Israel as a nation. When Jesus said the kingdom had drawn near, he meant that kingdom vision of the Old Testament’s narrative. So I offered there the briefest definition of “kingdom” that every Christian can use to get a solid grip on the meaning of term: a kingdom is a people governed by a king.

Because it is a people (and not reducible to an ethic, social or private, nor reducible to the unleashing of God’s redemptive power), the Bible reader is driven to ask for the New Testament: Who is the kingdom people now? The answer is “church” with church understood not in supersessionist ways (the church replacing and God abandoning Israel) but in expansionist, progressivist ways: the church expands Israel by opening its doors to Gentiles.

In Kingdom Conspiracy, then, I offer five elements to the meaning of kingdom in the Bible and they are these: a kingdom (1) has a king who (2) rules both by way of redemption and governing, and this king rules (3) over a people [Israel, church] through the revelation of (4) the law [Torah, teachings of Jesus and the apostles], and this king rules (5) in a land. All five of these elements are needed to speak biblically about kingdom, and all five are needed to be a kingdom-mission church. Far too many have reduced the kingdom to one element. Some reduce it to the redemptive rule of God in a person’s life, in some healing miracle, or even in the influentialist theory (Kuyper, Niebuhr) of participation in culture and state. But others reduce it to law/ethics and then go public with deeds of compassion or social justice. Well and good for both of the important themes in these reductions, but to reduce kingdom to these excludes the central core theme: the people. Which is to say, many erase church from kingdom theology and see kingdom work what is done in the wider world – for the common good. It is good to care about the common good but the common good is not what kingdom means in the Bible. Kingdom is a people, and that people is Israel expanded, the church.

When we equate kingdom with the public sector, we have become Constantinian or Erastian or some other kind of compromise of church and state. If we see that kingdom is a people, and that people is Israel expanded into the church that lives under King Jesus, then immediately kingdom people are not servants of the state, they fight imperialism and colonialism, and they become a cruciform counter cultural community. They become agents of Jesus in the world, for the world and also at times against the world.

Now then, what does kingdom mission look like? I suggest you might be a kingdom-mission people/church if the following ten statements are true of your church, and I realize each of these begs for development. I offer a statement with brief support and clarification.

The cruciform character of King Jesus shapes every major dimension of your church.

The character of a king shapes the character of that king’s kingdom, and the character or our king is cruciform. I appeal here to Philippians 2:6-11 – Jesus is the one who became a slave unto death to make us kings and queens in the kingdom. We are to live as did our king: as servants for the sake of others.

The church perceives itself as a people redeemed and rescued from the world (sin, self, systemic evil) by King Jesus.

Our king redeems, and the kingdom people is the redeemed people of that king. One can study Matthew 8—9 or call to mind Mark 10:45 or 14:24, or even the unleashing of redemptive power through the Spirit in Matthew 12:28. But there is a strong redemption theme in the kingdom mission of Jesus: God is redeeming people from their sin, from their diseases, from narcissistic selfishness and from systemic evils.

The church knows at the deepest level that it is governed by King Jesus and not by culture or state.

Here kingdom-mission churches draw a deep line: they are not subservient to the state even if they are good citizens when they should be. Instead, they answer to King Jesus and follow his teachings and cruciform vision and that alone sets their agenda for how to live in this world. Kingdom-mission churches will at times need to challenge the empire.

The church challenges the “lordless lords” of our cultures and our countries.

Postmodernity’s greatest insight, or least one of its enduring legacies, is that it taught us all that each of us is complicit in the ways of the world and state and culture. But kingdom-mission churches develop a hermeneutic of discernment that detects the lordless lords that must be cast down so that King Jesus can rule. I think here of 2 Corinthians 10:4 and Colossians 2:6-7, but also the narrative overthrow of evil in Revelation 17—22.

The church embodies, or seeks to embody, the kingdom realities about which Jesus and the Bible speak.

Perhaps the most disappointing element of kingdom chatter today is the complicity of thinking kingdom is the same as the public realm. Since kingdom is a people, and since that people is Israel expanded into the redeemed church, kingdom teachings are to be embodied by kingdom people as a visible witness to the world of the ways of the kingdom.

The church is known above all for loving one another, for loving God, and for loving their neighbors well.

Both Jesus and the apostles made the charter of Christian living loving God and loving others, so kingdom-mission churches are known for being an ocean of love for God and for one another and for all their neighbors. Love, I contend, needs more careful definition than it often has in our culture: it is a rugged commitment of presence, advocacy and direction toward Christlikeness. God loves by making a rugged commitment (covenant) to with us, to be for us and to transform us, and so our love is to be God-like and Christ-like.

Again, kingdom-mission churches aren’t just committed to justice in the public sector but seek to embody it especially among one another in the local church fellowship. What we learn there will spill over for the common good as the only way kingdom-mission people know how to live.

The church cannot avoid – because of God’s grace and power at work – being people of “good works” in the public sector.

What many people today call “kingdom” is actually called “good works” in the Bible – both by Jesus in Matthew 5:13-16 and most especially by Peter in 1 Peter 2:11-12 (elsewhere in 1 Peter, too). Good works is what kingdom-mission people do in the public sector and these good works demonstrate the resurrection power of Christ at work in kingdom people.

The church becomes “sacred space” and “kingdom space” in your community.

No one can read the Bible and not be struck by the land promise. What does that mean for us today? While many criticize the implicit Gnosticism of Christians in their view of heaven or the spiritual life, I see implicit Gnosticism in the way we talk about church. It is for many only a “spiritual” reality, but as Christ became incarnate so also the Body of Christ is incarnate: it is a living, breathing, physical reality. A local fellowship is to be sacred space and kingdom space by taking up real space in this world for the kingdom to breathe out redemption.

The church learns that its spiritual disciplines foster this kind of community rather than just personal spiritual formation.

Now a challenge: What spiritual disciplines do we need to focus on in order to form and foster being a kingdom-mission church?