Some texts in the Bible disturb and those who aren’t disturbed bother me more than the texts. Take Deuteronomy 21:10-14, which now appears in the NRSV:

Deut. 21:10 When you go out to war against your enemies, and the LORD your God hands them over to you and you take them captive, 11 suppose you see among the captives a beautiful woman whom you desire and want to marry, 12 and so you bring her home to your house: she shall shave her head, pare her nails, 13 discard her captive’s garb, and shall remain in your house a full month, mourning for her father and mother; after that you may go in to her and be her husband, and she shall be your wife. 14 But if you are not satisfied with her, you shall let her go free and not sell her for money. You must not treat her as a slave, since you have dishonored her.

In their book, William Webb and Gordon Oeste, Bloody, Brutal, and Barbaric: Wrestling with Troubling War Texts, take this text on and form a paragraph stating the moral problems many of us face when we read the passage:

Clearly, the war ethic of ancient Israel had an ugly and problematic sidein how warriors treated female captives. Beyond the generic issues undeilying Deuteronomy 21:10-14-heavy-handed patriarchy, war, sexual property, and ancient-world notions about progeny. We need to acknowledge at least five ethical problems as attendant to this text: (1) excessive value is placed on external beauty,
(2) one month hardly seems long enough for the grief andadjustment,
(3) the marriage is either forced or at least manipulative in view of alternative prospects for the woman,
(4) the sexual relationship is coercive due to the extreme vulnerability of war captives, and
(5) in any number of cases the level of sexual violation would have been comparable (but not identical) to what we today label as marital rape.

They add two more problems, both of which they think are misguided: “Two remaining ethical issues associated with the pretty woman passsage require attention: (6) progeny purity is the real/true motive for the waiting period, and (7) battlefield rape is permitted for Israelite warriors” (91). 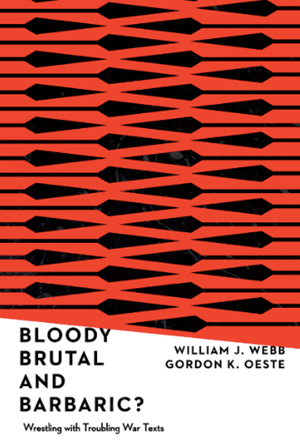 This series on the blog takes up Bible war texts because they are texts that have haunted me most of my Bible-reading days. I’m reading 2 Samuel right now and, frankly, too many passages are barbaric and revolting. Why, we ask ourselves as we read such texts, are these in our Bible? And, we ask, Were they not bothered? The answer is probably No, and Webb-Oeste bring that to our attention for the text above:

Ancients would not have read the pretty-woman text quite like we do today. The ancient-world horizon produced an almost endless number embedded blinders that make our assessments both necessary and, admittedly anachronistic, judgments. We will simply mention four blinders directly related to the rape of women:

(1) antiquated rape laws in general.with sexual property concepts depreciating women;
(2) the dominance ofarranged marriages, which still function as a type of rape and/or sexual coercion in many cases;
(3) there was no legal concept of rape within marriage (only in premarital cases);
and (4) there was certainly no ancient legal assessment of rape by soldiers as a war crime against humanity. These developments in law—all good ones—have come into being withinthe last one hundred Years.

Webb-Oeste believe the way to read the Bible about passages like this is to read it “redemptively.” I have provided their chart before but it should be posted again here: 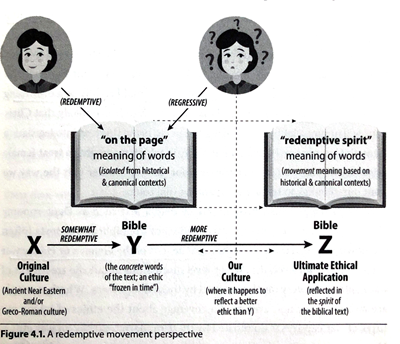 In this model not all of the Bible’s morality is permanent. Some of it shifts and develops over time, and their proposal is that we are to learn to discern the moral movement and the “redemptive spirit” of texts to discern how best to perceive and live the Bible. Every text is in a context, not all contexts are pristine and pure; some contexts are morally questionable and the Bible enters into such spaces with redemptive moves, but not all redemptive moves are the fullest revelation of redemptive life. Such is the case with this war text from Deuteronomy. They further propose that we as Christians learn to assess and read the Bible from the angle of “Z” – the ultimate ethical vision of the Bible.

While an ancient horizon and embedded blinders do not excuse or minimize the ethical downside of a text, their existence ought to cause us all to appreciate and even to applaud – in our world as well as in the ancient one- where progress, even if incremental, is made. This positive thought about celebrating incremental change sets the stage for the next chapter [emphasis mine].

They then proceed to a solid chp that examines ancient war rape, compare it to Israel’s own practices, and then offer conclusions on how this text enters into a world of destructive, disgusting violence against women with (what can only be called) incremental redemptive movements:

a one-month delay for mourning
mourning/transition rituals that permit. intense grieving
marriage covenant before sex
in the event of divorce, no selling the woman as a slave (she is a freewoman)
concern voiced for her honor (placing blame for the divorce on the male)

When sex and violence in war collide, within Scripture, we nonetheless discover something that is worth embracing: the real and sometimes even bold actions of an incremental ethic that embodies an underlying redemptive spirit.

When read within the horizon of an ancient world, the heavy darkness of war-rape texts such as Deuteronomy 21 and Numbers 31 are pierced by numerous shafts of bright, redemptive light – meaning easily missed from our present-day horizon. Such light and beauty amid the darkness is consistent with, and even quietly inviting toward, a journey of faith.

Join the conversation on Facebook
Tags:
None
Posted:
February 24, 2020