One might wonder from reading Paul if there was not an age requirement to be an elder/bishop.
Scot McKnight

Seniors in our churches today are not valued as they should be. There are plenty of them in most of our churches as their numbers are growing. We value creativity of youth today more than the wisdom of age. So a reminder from the Bible and a rather noticeable demographic shift occurring in our churches that may call for us to form councils of wisdom in our churches.

The apostle Paul, in Titus 1, says this:

Titus 1:5 I left you behind in Crete for this reason, so that you should put in order what remained to be done, and should appoint elders in every town, as I directed you: 6 someone who is blameless, married only once, whose children are believers, not accused of debauchery and not rebellious. 7 For a bishop, as God’s steward, must be blameless; he must not be arrogant or quick-tempered or addicted to wine or violent or greedy for gain; 8 but he must be hospitable, a lover of goodness, prudent, upright, devout, and self-controlled. 9 He must have a firm grasp of the word that is trustworthy in accordance with the teaching, so that he may be able both to preach with sound doctrine and to refute those who contradict it. [NRSV]

The Bible’s world – from Moses to Paul – valued age as something expressing maturity and wisdom.

Not all old people were wise and not all young people were fools, but the Bible’s valuing of age is largely neglected today. But a remind of valuing age: the term “elders” meant “older people” and it would not completely off base to translate the term “elderly.” It was about the seniors of that society. Always.

Notice just a few texts from the Old Testament:

Ex. 3:18 They will listen to your voice; and you and the elders of Israel shall go to the king of Egypt and say to him, ‘The LORD, the God of the Hebrews, has met with us; let us now go a three days’ journey into the wilderness, so that we may sacrifice to the LORD our God.’

Num. 11:24 So Moses went out and told the people the words of the LORD; and he gathered seventy elders of the people, and placed them all around the tent. 25 Then the LORD came down in the cloud and spoke to him, and took some of the spirit that was on him and put it on the seventy elders; and when the spirit rested upon them, they prophesied. But they did not do so again.

Josh. 24:1 Then Joshua gathered all the tribes of Israel to Shechem, and summoned the elders, the heads, the judges, and the officers of Israel; and they presented themselves before God.

1Sam. 8:4 Then all the elders of Israel gathered together and came to Samuel at Ramah

Prov. 31:23 Her husband is known in the city gates, taking his seat among the elders of the land.

Ezek. 8:1 In the sixth year, in the sixth month, on the fifth day of the month, as I sat in my house, with the elders of Judah sitting before me, the hand of the Lord GOD fell upon me there.

Acts 15:6 The apostles and the elders met together to consider this matter.

James 5:14 Are any among you sick? They should call for the elders of the church and have them pray over them, anointing them with oil in the name of the Lord.

1Pet. 5:1 Now as an elder myself and a witness of the sufferings of Christ, as well as one who shares in the glory to be revealed, I exhort the elders among you

1Pet. 5:5 In the same way, you who are younger must accept the authority of the elders. And all of you must clothe yourselves with humility in your dealings with one another, for “God opposes the proud, but gives grace to the humble.” 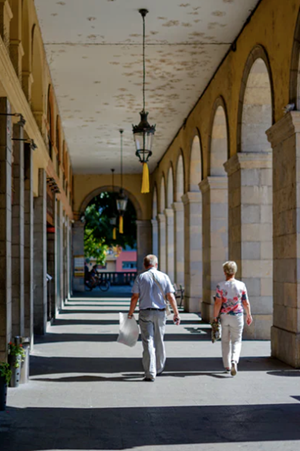 You can ask the older folks in your church if they are valued, and they may tell you the truth. At least ask. A side note: “older” is a relative term now as it was in the Old and then also in the New Testament times. There isn’t and wasn’t a specific age when one turned into an elder.

A growing demographic today, as described in a recent report, is the “yolds.” The young olds.

THE YEAR 2020 will mark the beginning of the decade of the yold, or the “young old”, as the Japanese call people aged between 65 and 75. The height of the baby boom, the period of high fertility in rich countries after the second world war, was 1955-60. The traditional retirement age is 65, and 2020-25 is 65 years later. One might therefore expect peak retirement for baby-boomers in the coming years—except that they are not retiring.

Lots of them, and not at all retired or withdrawn: they are engaged. The report continues with this important statement that churches would be wise to ponder:

By continuing to work, and staying socially engaged, the boomers, in their new guise as the young old, will change the world, as they have done several times before at different stages of their lives.

Not withdrawn but engaged, the yolds have plenty of resources and health that churches can value:

The yold are more numerous, healthier and wealthier than previous generations of seniors. There will be 134m 65- to 74-year-olds in rich countries in 2020 (11% of the population), up from 99m (8%) in 2000. That is the fastest rate of growth of any large age group. Health worsens with age, but the yold are resisting the decline better than most: of the 3.7 years of increased life expectancy in rich countries between 2000 and 2015, says the World Health Organisation, 3.2 years were enjoyed in good health. The yold are also better off: between 1989 and 2013, the median wealth of families headed by someone over 62 in America rose by 40% to $210,000, while the wealth of all other age groups declined.

The yold are busier, too. In 2016 just over a fifth of people aged 65-69 were in work in rich countries, a figure that is rising fast. Working is one of the factors that are helping people stay healthy longer. A German study found that people who remain at work after the normal retirement age manage to slow the cognitive decline associated with old age and have a cognitive capacity of someone a year and a half younger.

Maybe we need to appoint “yolds” in every city.

The Bible’s idea is that age and wisdom are correlated. IF that is the case, and it often is, the Yolds in our churches need to be consulted, need to be advisors, need to be what they are – elders – and as such they can become a council of wisdom.

What say you? I say, Think about it.