I have been reading the novel of Eugene Vodolatzkin, called Laurus, where a pious charismatic healer is on a 15th Century but timeless journey of redemption as he ministers the graces of God to those in need of healing. Along with Vodolazkin’s wondrous novel, I have seen the news that Marilynne Robinson’s got a new one coming, called Jack, and that got me to think about Gilead and the two pastors musing about pastoring in Gilead. [#ad]

What has me pondering is the role the church plays in these novels. A role of centrality, of pious strength, and of moral direction.

Visit most any city in Europe and you will see a church, often domed and large, in the middle of the city plan. The big cities in the USA, too, often have large historic churches in the center of the city.

Why? Because the church was central. As these cities grew more churches were built because these historic cities grew with historic churches. People walked to church so there were churches in each neighborhood.

This isn’t nostalgia, and we aren’t pretending to some kind of pristine America. 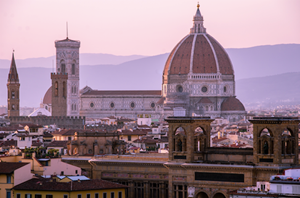 What I want to point to is the centrality of church in the cities of America.

We could ask Why?

I ponder Why? because of this last Fall’s report from Pew.

Both Protestantism and Catholicism are experiencing losses of population share. Currently, 43% of U.S. adults identify with Protestantism, down from 51% in 2009. And one-in-five adults (20%) are Catholic, down from 23% in 2009. Meanwhile, all subsets of the religiously unaffiliated population – a group also known as religious “nones” – have seen their numbers swell. Self-described atheists now account for 4% of U.S. adults, up modestly but significantly from 2% in 2009; agnostics make up 5% of U.S. adults, up from 3% a decade ago; and 17% of Americans now describe their religion as “nothing in particular,” up from 12% in 2009. Members of non-Christian religions also have grown modestly as a share of the adult population. …

Some think – Greeley and Houk – much of church decline in the mainline can be explained by decline in the number of children church goers have. The same trend is now being seen among evangelicals. For instance, Liuan Huska at CT:

Lily Jones Howard grew up in a church in southern California with a burgeoning children’s and youth ministry. The church held afternoon and evening AWANA clubs and ran separate junior high and high school youth groups. She compares that to the church she and her husband and two children attend now. The median age of members, she guesses, is about 65 or 70. “The pastor has said explicitly that children are the lifeblood of the church,” Howard said. The congregation makes an effort to welcome young families like hers.

In the near future, an increasing number of American evangelicals may find themselves with church experiences like the Howard family’s for one principal reason: evangelicals with children are slowly becoming harder to find.

Americans in general are having fewer children today than they did two generations ago. Spiking after World War II, the fertility rate declined to around two lifetime births per woman in the ‘80s and has hovered there since, according to the Pew Research Center. Evangelicals, however, had maintained higher than average fertility rates until recently, according to University of Oklahoma sociologists Samuel Perry and Cyrus Schleifer.

We ask another Why? Why the decline? Is birth rate the explanation? Perhaps, but surely only part of an explanation.

Humans are worshipers. Humans are designed (by God) to find meaning in something. They will, somehow. It’s as instinctive as ducks migrating from the north into the warmer climes. Humans will find something to give themselves to because we are born with the instinct to worship.

The de-centralization of churches in America, which can only mean the decline in worshiping God, correlates with American Christians – exvangelicals, ex-Christians, ex-church goers – giving themselves to politics, to belief in voting and agitation for policies and changes by trusting in government.

It is not unfair to say that this idolatry.

Social media seems to draw everyone into a comment about everything political, but overexposure to such discussions eventually turns us into politically-obsessed people. Which is another term for idolatry.

Long ago I read a study that documented the correlation of one’s more progressive political orientation to/with attendance in a more progressive denomination. The result of that study was that the closer one’s politics was to one’s church’s politics the less likely that person would go to church. The study was about the mainlines, with the stunning result that church attendance and participation declined as America became more and more like mainline social visions. Why go to church if it is no different than what one got daily in the NYTimes?

Why go to church if one’s FB friends and one’s church people are the same? or if one’s FB banter is the same as the preacher’s banter?