One could ask if the environment is a gospel issue, a kingdom issue, or a redemptive issue – or is just a body issue, a creation concern, something that is just not as vital as gospel and kingdom and salvation.

One could also ask why the environment figures so often as an invisibility in much Christian theology. Sandra Richter, in Stewards of Eden, mentions a few of the more prominent rationales.

This is a fine book and one that is much needed today, and would be especially helpfu in adult small group studies. It can generate many conversations about what we can do to embrace our calling as stewards of Eden/creation.

She begins her discussion with the famous burn-creation passage in 2 Peter 3:10-13, which should be cited here because many have either not read it or have done so and forgotten, and more importantly, as an idea has sustained its own life in modernity’s form of Christian theology.

But the day of the Lord will come like a thief, and then the heavens will pass away with a loud noise, and the elements will be dissolved with fire, and the earth and everything that is done on it will be disclosed. Since all these things are to be dissolved in this way, what sort of persons ought you to be in leading lives of holiness and godliness, waiting for and hastening the coming of the day of God, because of which the heavens will be set ablaze and dissolved, and the elements will melt with fire? But, in accordance with his promise, we wait for new heavens and a new earth, where righteousness is at home.

Add to this, as she does, passages like 1 Thess 5:2-3 and Rev 6:12-17 and one can see something in the idea of this earth is going to be destroyed. Richter says these must be understood as variants on the “Day of the Lord,” a day of judgment on the kosmos and on human sinfulness. As in Isa 13:2-13. Lots of passages along this line. 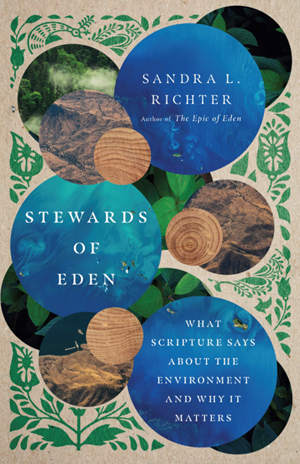 As apocalyptically-shaped language, it is also metaphor and image and evocation and rhetoric with intent to get the people of God to repent and to return to the task God has assigned for humans on the earth.

Thus, instead of destroying the earth it is apocalyptic language for God’s searching judgment.

I consider that the sufferings of this present time are not worth comparing with the glory about to be revealed to us. For the creation waits with eager longing for the revealing of the children of God; for the creation was subjected to futility, not of its own will but by the will of the one who subjected it, in hope that the creation itself will be set free from its bondage to decay and will obtain the freedom of the glory of the children of God. We know that the whole creation has been groaning in labor pains until now; and not only the creation, but we ourselves, who have the first fruits of the Spirit, groan inwardly while we wait for adoption, the redemption of our bodies. For in hope we were saved. Now hope that is seen is not hope. For who hopes for what is seen? But if we hope for what we do not see, we wait for it with patience.

Start at Genesis 1, not Genesis 3, and go all the way to the end (here in Romans 8) and we see the redemption of creation as it groans for redemption.

Join the conversation on Facebook
Tags:
None
Posted:
July 21, 2020