When Luke summarizes the apostles' preaching, he can reduce it to one word
Scot McKnight

In working again through my translation of the Book of Acts I began to record passages where Luke the Storyteller put into words a summary of what the apostles preached when they were gospeling.

Here are the verses in the NRSV, with the appropriate words in bold:

Acts 8:35 Then Philip began to speak, and starting with this scripture, he proclaimed to him the good news about Jesus.

Acts 11:20 But among them were some men of Cyprus and Cyrene who, on coming to Antioch, spoke to the Hellenists also, proclaiming the Lord Jesus.

Acts 17:18 Also some Epicurean and Stoic philosophers debated with him. Some said, “What does this babbler want to say?” Others said, “He seems to be a proclaimer of foreign divinities.” (This was because he was telling the good news about Jesus and the resurrection.)

Acts 18:5 When Silas and Timothy arrived from Macedonia, Paul was occupied with proclaiming the word, testifying to the Jews that the Messiah was Jesus.

Acts 18:28 for he powerfully refuted the Jews in public, showing by the scriptures that the Messiah is Jesus.

Acts 20:20 I did not shrink from doing anything helpful, proclaiming the message to you and teaching you publicly and from house to house, 21 as I testified to both Jews and Greeks about repentance toward God and faith toward our Lord Jesus.

Acts 28:23 After they had set a day to meet with him, they came to him at his lodgings in great numbers. From morning until evening he explained the matter to them, testifying to the kingdom of God and trying to convince them about Jesus both from the law of Moses and from the prophets.

Acts 28:31 proclaiming the kingdom of God and teaching about the Lord Jesus Christ with all boldness and without hindrance.

Here are eight or nine – one could combine the last two – instances of summarizing early Christian gospeling. 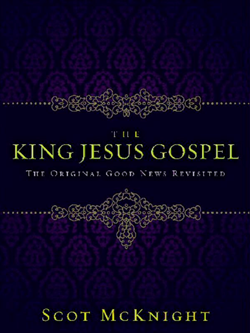 I believe in the Bible as God’s revelation to us, and I believe Christian theology has to begin first with Scripture (prima scriptura).

I also believe if our framing of theology is not according to Scripture, we are called to adjust it until it conforms to and is consistent with the gospel. This is what I do in The King Jesus Gospel.

The uniform message can be reduced to one word: Jesus. Or …

Not one of these summaries of apostolic gospeling contains a word about salvation – justification, reconciliation, redemption, substitution – and that’s worthy of note.

Gospeling today could learn from the apostles. We could learn that gospeling others is about talking about Jesus, announcing Jesus, and generating conversations about Jesus. I promise you, it will get to redemption because it leads there, as can be seen with Peter in Acts 10. And, telling others about Jesus is attended by the Spirit who will prompt repentance, forgiveness of sins and redemption, that too in Acts 10.

Join the conversation on Facebook
Tags:
None
Posted:
July 20, 2020