Sometimes someone has to say it, so let’s get straight to the point: there’s way too much public grandstanding today. Social media in the time of COVID permits some – too many – to stare at their FB, Twitter, and Insta feeds all day long waiting to get outraged.

Then here it comes: some grandstanding. (From both Right and Left, Left and Right.)

Grandstanders will oppose the suggestions, the point, the accusation because of what they think they are doing.

Justin Tosi and Brandon Warmke, in their new book, Grandstanding: The Use and Abuse of Moral Talk, define it this way:

Grandstanders want to impress others with their moral qual-ities. We call this the Recognition Desire.
Grandstanders try to satisfy that desire by saying something in public moral discourse. We call this public display the Grandstanding Expression.

Grandstanding is rooted in the common human desire to have others think well of us. As we want some to think we are hardworking, or respectable citizens, or intelligent thinkers, or environmentally conscious – so we are tempted to grandstand. At the core is a desire to be thought of as somewhat better than others – sometimes great, sometimes just better.

So, the person wants to manage one’s reputation and public image. A person wants to elevate one’s social status. (Sound familiar?) (By the way, they don’t think virtue signaling is the same as grandstanding but I would say the concepts overlap, at times significantly.) 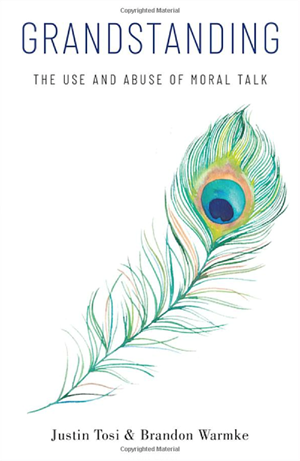 This happens, they explain, in two ways: prestige (public presence and reputation based on one’s status and achievements) and dominance (intimidating and imposing and coercing others into thinking about one’s self). Dominance today is often achieved by shaming others. Thiis creates fear and humiliation. Prestige happens by ramping up one’s status and dominance by knocking down the status of others. Prestige is more about one’s own group while dominance more about the out-group (others).

If we are anxious about not responding to some news item about which others are filling up our social media with (grandstanding) expressions, and if we act on that anxiety, we are grandstanding.

To live all day long in the frenzy of this tension is to be addicted to grandstanding. Why, I ask, are we all now so driven to think we must say something about everything? (Grandstanding.)

Grandstanding dwells in indirect language. One doesn’t say, “Look at me, I’m morally respectable.” Instead, one comments about someone else’s failure or some policy, either of which illustrates your moral perceptions. So, the means of Expression is often the implication rather than the statement itself. One can always deny bragging if one is simply making a statement.

Self-righteousness, they state, is common to humans and one of the easiest biases to demonstrate. We are moral self-enhancers and over-raters. We curate our moral reputations. We can be telling the truth and be grandstanding.

People who make high-minded moral pronouncements on social media and use moral talk to shame and silence people often explain their behavior by saying they are standing up for the oppressed or defending what is right. But these same people probably wouldn’t speak this way in a private face-to-face conversation. This suggests that what these people really want is to use their public platform to garner moral prestige, or worse, to dominate others for social benefits.

Tosi and Warmke are nothing if not insightful. We all need to hear this message.

Election season is laced together by overt grandstanding of both a Prestige and Dominance sort. Some will think this book is about the Left, but it’s not at all. It’s about human nature. I don’t have evidence for this but I suspec the political party out of power in the White House will be more prone to grandstanding.

As Jesus talked about the hypocrites of his day – a different, but related concept – so pastors today need to talk about moral grandstanding. While Tosi and Warmke may be more about a public posturing and so more a social issue, I think this book should be read by all pastors and should penetrate the mind. Why? To deepen Christian spiritual formation.

Join the conversation on Facebook
Tags:
None
Posted:
July 28, 2020