What kind of Jew?

He was a Jew, a sincere Jew, and that means he was willing to get into debates about the Torah. He has a Hellenistic dimension: he wrote in Greek, after all, and his Bible was the Greek Old Testament (Septuaginta, LXX).

Paul’s natural allies in some ways were the Pharisees and the Qumran community folks. Which means he may be Hellenistic but he’s also one who fits into the Land’s Judaism and Jews.

But Johnson thinks Paul fits best as a Prophetic Jew, a Jew who saw himself in terms of being a prophet (and he connects this to “apostle”). Take a look at Isaiah 49:1: “Before I was born the LORD called me; from my mother’s womb he has spoken my name.” Compare to Gal 1:15-16 where Paul uses the same kind of language for himself.

His kind of past Judaism was rocked by Jesus and he becomes a prophetic Jew.

What kind of interpreter of Scripture

There are lots of discussions of this topic but Johnson paves a path of his own: what kind world does Paul inhabit, and Johnson says his world is a Scripture-defined world (what many today would call “biblicism”).

There is no distance between the Scripture’s world and Paul’s world: he is in it and it is in him. The death and resurrection of Jesus disrupted that world but it was a Scripture-shaped world reshaped by a Scripture-saturated world.

… and how from childhood you have known the sacred writings that are able to instruct you for salvation through faith in Christ Jesus. All scripture is inspired by God and is useful for teaching, for reproof, for correction, and for training in righteousness.

How did Paul fit in the Greco-Roman world? 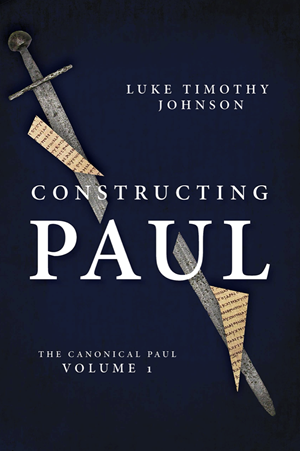 Johnson opposes postcolonial readings or anti-imperial readings of Paul, in part because modern studies of empire don't map onto ancient Rome that simply and in part because the evidence of Paul doesn’t fit anti empire postures: he’s positive. So, one has to suppose his positives are smokescreens. Subversion of empire is not in view in Paul’s letters. Of course, Johnson observes, calling Jesus “Lord” will butt up against Caesar and empire at times but he’s not intentionally going after empire. Joe Modica and I co-edited a book on this topic some time ago.

One of Johnson’s big themes here is that Paul was not educated in the higher levels of Greco-Roman ideas of education and what Paul knew about rhetoric and philosophy and religion were all things that were “in the air” more than anything carefully studied and known. He began in a Greek education style in Tarsus (if we know that), he then studied in the Land, and his absorption of the otehr elements of Greek and Roman culture was what someone could pick up in the plaza listening and debating.

He shows Paul was not a Platonist, an Aristotelian and not a Stoic either.

Scot McKnight
Brazos Press
2019-09-03T00:00:01Z
272 pp., 19.19
View More
Christianity Today Weekly (Weekly)CTWeekly delivers the best content from ChristianityToday.com to your inbox each week.
Today in Christian History (Daily)A daily newsletter featuring the most important and significant events on each day in Christian History.
Jesus Creed (Weekly)One of the most popular and thoughtful evangelical bloggers on the web, Scot McKnight discusses theology and current events in conversation with others.

Join the conversation on Facebook
Tags:
None
Posted:
June 11, 2020