I no longer see Common Nighthawks in our neighborhood. (Not the bird for the article image, by the way.) One day I made a couple calls to find someone who knew why and he said their nesting habitat – of all things, graveled cover roofs – was no longer as much available. They are in “steep decline” because of pesticides, insecticides, habitat loss and the predatory work of other animals (see here). I loved watching them flit and dive and soar through the air in summer evenings, but I’ve seen them around us only one evening in the last decade. I was hoping they were back when I saw them. Not so.

Decades back we saw them every evening.

We are assigned by God – from creation on – to superintend and care for this world and its animals. Sandra Richter, in Stewards of Eden, examines what the Old Testament says about care for God’s wild creatures and animals.

Those who will pause long enough to look or listen – we are hearing a Common Yellowthroat in our neighborhood daily – will be drawn into worship with Sandra Richter, who says,

Why is my heart moved to worship by the splendor of an eagle on the wind, the staggering realities oflife in all its complex forms ? Why do I sit in front of my television watching “March of the Penguins” with my seven-year-old and find myself in awe of a God who could instill in the heart of a penguin a level of self-sacrificial obedience that puts this believer to shame? The answer is most simply because the cosmos, in all its beauty and complexity, is a reflection of the God who made it. And I am made in the image of that same God.

Which means care for God’s creation. Notice how God’s care and provision is perceived by the psalmist:

You make springs gush forth in the valleys; they flow between the hills, giving drink to every wild animal; the wild asses quench their thirst … t p.p1 {margin: 0.0px 0.0px 0.0px 0.0px; font: 14.0px 'Times New Roman'}span.s1 {font: 11.0px 'Times New Roman'}span.Apple-tab-span {white-space:pre}he trees of the LORD are watered abundantly, the cedars of Lebanon that he planted. In them the birds build their nests; the stork has its home in the fir trees. The high mountains are for the wild goats; the rocks are a refuge for the coneys (104:10-11,16-18). 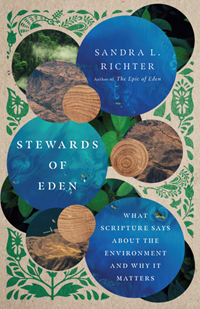 Ask my students who have traveled with us to the Holy Land: Do I watch for the birds? (Hoopoes are my favorite.)

But… Richter reminds us,

… as any environmentalist would tell us, the single greatest cause of the extinction of an animal species is the destruction of its habitat. And in America we are presently devouring nearly two million acres a year in the noble quest for urban sprawl.

2 million acres per year. This destroys habitat and destroys the animals dependent on that habitat. Her example, later in the chapter, is about black bears in the Mississippi delta.

Israel, and therefore its scriptures, was filled with animals and many of them are no longer there.

As a result of its diverse ecosystem and critical role in animal migration, the variety of species that have inhabited this small territory is extraordinary. The white oryx, the Syrian brown bear, the Asiatic lion and cheetah, and the Syrian wild ass were here before their habitats were destroyed. The jungle cat once occupied the now-defunct Hulah River basin. The sand cat, wild cat, caracal, and leopard were once found here as well. Aurochs, bubal hartebeest, the Nile crocodile, and the hippopotamus once inhabited the Jordan River and its densely vegetated alluvial plain. Some believe the Syrian elephant passed through this region. The acacia and dorcas gazelle, Persian fallow, roe, and red deer, the Nubian ibex, and wild boar were all food sources (see Deut 12:15, 22; 14:5; 15:22). The Arabian and north African ostrich, hoopoe bird, eagles, hawks, owls, and songbirds too numerous to name either currently inhabit this region or are known via zooarchaeology (bones retrieved from excavation). There are more snakes in the southern Levant than you want to know about. Lions, leopards, bears, jackals, foxes and wolves have all been identified either through biblical references or excavated remains. Then there is the Eilat Coral Beach Nature Reserve just off the southern tip of Israel, filled with a staggering array of sea life. This is the sort of space that the Nature Conservancy would purchase if it could.

And what about us? Are we gobbling up acres of habitat for God’s creatures?

Deuteronomy tells Israelites not to take a mother bird and its eggs at the same time and the reason was because of sustainability. Take the eggs, but not the mother.

Assyria gloated in the sport of slaughtering lions, and brazenly displayed taking the mother bird and the eggs— she provides pictures of the scenes – but not Israel. It was to be different.

Sustainability is not a modern invention. It runs deep in the Bible.

Laura Barringer; Scot McKnight
Tyndale Momentum
2020-10-06
256 pp., 20.69
View More
Christianity Today Weekly (Weekly)CTWeekly delivers the best content from ChristianityToday.com to your inbox each week.
Today in Christian History (Daily)A daily newsletter featuring the most important and significant events on each day in Christian History.
Jesus Creed (Weekly)One of the most popular and thoughtful evangelical bloggers on the web, Scot McKnight discusses theology and current events in conversation with others.

Join the conversation on Facebook
Tags:
None
Posted:
June 30, 2020