It is with sadness and a profound sense of gratitude that I pass on the news I’ve heard from some fellow students that our professor, James D.G. Dunn, has passed into to his eternal reward. Our prayers today will be directed toward his wonderful wife, Meta, and children Catrina, David, and Fiona.

Most of us know Professor Dunn as “Jimmy.” On the day Kris and I and our two small children arrived in England to study with him at Nottingham, he came by the home to greet us and right away said to me “Call me Jimmy.” So I did, but it took some getting used to.

That sense of siblingship carried over into my year in Nottingham as well. (We lived in Cambridge the second year.) He told me I could come by his office any time I wanted to have a “cuppa” (coffee), which I did every other week or so. He was always engaged in his writing and our theses (my peers were James Davis and David Meade and Charles Holman) as well as news about scholarship and the world. Sometimes we had lunch together in the union (I believe was its name). The cherry blossom trees and the rhododendra at the University continue to cheer our memory of the University where Jimmy got his start.

While there in that first year Jimmy gave me a ring to say he’d like me to come to his office the next day, which was a bit discomforting – the news was that he had taken the Lightfoot Chair at Durham and that he would be teaching there but living for some time in Nottingham. So, he said to me, “You can come with me, you can stay here and I will supervise your thesis (and I only learned many years later that he did that without pay), or you can shift to a new professor at Notts.” I stayed with Jimmy for he was the reason I was there to study.

Once finished and teaching and attending the SBL meetings it seemed I saw Jimmy nearly every year. Often the students had dinner with him and other times we were able only to sit down over coffee or breakfast. 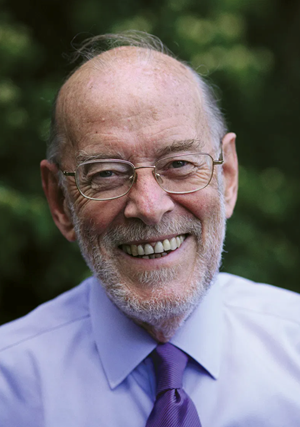 When I think of Jimmy’s work I think of the New Perspective, and he is mostly responsible for it becoming an official expression, but also his life-long commitment to studies on the Spirit. He is known for his great commentaries on Romans and Galatians and Colossians, but he geared his life from early in his career toward his Beginnings of Christianitiy 3 volume work that he completed late in his career: Jesus Remembered, Beginning from Jerusalem, and Neither Jew Nor Greek.

Jimmy loved academic meetings and papers and presentations. He was always excited about new ideas, ready for give and take, and just loved being “in the room where it happened” (to quote from Hamilton).

Always kind, always greeting us with a big hug, always knowing our spouse’s and children’s names, and always as interested in us as people as we were professors or authors.

I will add more to this as I think of things, but I want to express to the whole world how much I am indebted to this Scotsman who loved his family and his Lord and his work and the church. I liked too that he was never afraid to cut across the grain if he thought the evidence moved in that direction.

He was a scholar with the courage of his convictions. Like Melchizedek, he still speaks through his students. I’m privileged to be one of them.

I am among the many who knew Jimmy as Doktorvator and as friend. I have many memories of him, but I will mention just one. During my first month at Durham University, Jimmy directed me to research on my proposed topic and to write my thoughts in a report due every two weeks. At the end of these papers, I was to indicate several questions to be pursued or ways to extend my research. After a month or so, I came upon an idea that I thought was worth investigation, but I had reservations. Frankly, the idea at the time seemed a bit crazy. And I realized that it may run against the grain of Jimmy’s own ideas, recently published in a paper. I didn’t know him very well at the time, and the thought of taking on such a scholar so early in my research was daunting. So I buried the idea last in a list. When I saw with him a few days later, Jimmy flipped the pages of my paper to the last page, and he went straight to that idea. He said to me that he thought it had the possibility of making a contribution to scholarship, perhaps better than his own. I’ll never forget his graciousness in putting a young student at ease.

I am grateful to be able to count Jimmy and his wife, Meta, as friends. Visits in their home, dinners shared at conferences, personal meetings to discuss my work – these are some of the precious memories I have of Jimmy Dunn, my friend. My condolences and deep sympathy to Meta, his beloved wife, and to their family.

Join the conversation on Facebook
Tags:
None
Posted:
June 26, 2020