You name the church and the story is nearly always the same. An accusation is made, the leaders assemble, the doors are closed, and the church “launches an investigation.”

Sometimes the leaders are patting themselves on the back for their “independent” investigation that they got to choose.

In choosing the investigators, they secured the result they wanted – with some mild handslapping –before the investigation was underway.

Only they don’t investigate. Call it what you want – subjectivism, favoritism, protectionism, reputation preservation, charismatic leaders can’t be that bad – the investigation too often turns into a sham.

Laced tightly with Christian words and claims and God’s blessings.

When the principal parties have the most to lose and they get to choose the investigators, the investigation is superficial, the church suffers, the victims are re-victimized, and the truth is not told.

Churches fluctuate between cultures of toxicity and cultures of tov (goodness). This October Laura Barringer (my daughter) and I have a book coming out about forming a culture of goodness in churches, and we are hoping every church elder board or vestry or session reads this book and ponders how to form goodness cultures in their own churches.

But today I want to help us to think again about what happens when churches investigate themselves over an accusation that may well manifest something toxic. What I’m about to quote church leaders should copy and enter into their bylaws as a warning.

I was reading something about how government, or the Federal Trade Commission, investigates itself and the bells rang about what too often happens in churches. The author, Gary Lawson, was having fun but he made his point, one that must be taken very seriously, and I quote him in full: 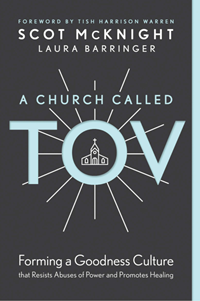 So very true, too, about churches.

Which is exactly why the women wanted Willow Creek to hire an independent investigation. Above is what they feared and above is what happened at first.

For this not to happen the church must (1) get out of the way in various ways, including but not limited to administrative leaves, (2) let an independent set of leaders [this requires #1 to be utterly true] find an independent investigative firm/team, (3) tell the truth all the way through, (4) open the files and doors, and (5) listen to the decision of the investigation. Then (6) make it public.

I.e., the power brokers in the church.

Join the conversation on Facebook
Tags:
None
Posted:
June 29, 2020