For most evangelicals the environment is on a spectrum from a benign lack of interest to a rather more aggressive negative attitude toward the environment. I once had a conversation with a committed and enthusiastic evangelical about a flight from Europe to the USA. On the way I had seen from the window an ocean of little icebergs. I mentioned to this person that it was evidence of global warming, and the person said to me, “You don’t believe in that, do you?” I said back, “I don’t have to believe it, I saw it!” The person snarled in a way that was clear I was duped.

Most churches seemingly show very little regard for environmental issues as a concern for serious thinking Christians. Environment is not found in most books about the Christian life or discipleship studies. It’s not part of our “introduction” to what Christians believe.

Now take a look at Sandra Richter’s new book, Stewards of Eden: What Scripture Says about the Environment and Why It Matters.

I wonder if you’d look around at your church’s materials on the Christian life or in your own library and ask yourself what’s available on environment. Think about it, it’s the first major instruction from God in the Bible: take care of this good world I’ve made for you!

Let’s start where she does, with politics – partisan politics:

Richter’s right here. As with so many moral topics or ethical concerns, politics in the sense of taking sides in a partisan manner has taken over.

In other words, somehow environmental advocacy has been pigeonholed into a particular political profile and has become guilty by association.

Is it then the general GOP persuasion of evangelicals that makes them unconcerned with the environment? I ask this as question.

Her second reason is our privilege: we often simply don’t see or experience the impact of our economic life on the planet.

Trees in Haiti were stripped from the land and it turned huge acreage into a pit of mud.

Trees in Kenya were stripped from mountains and damaged miles and miles. 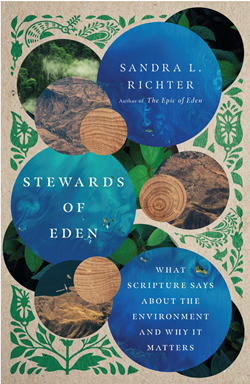 Pollution of the air.

Production of plastics that ruin the ocean’s biological balances.

We are sheltered from most of these most of the time. We don’t experience or see them up close enough that they impact us.

Third, our posture has far too often “you can’t take it with you” and “it will all burn anyway” and “we must care more about souls than seas.”

The end result? The church, particularly the evangelical wing of the church, has inadvertently dismissed the issue of environmental stewardship as peripheral (or even alien) to the theological commitments of the Bible.

If you want a responsible and accessible read, one that is as good for home Bible studies and Sunday School classes as it is for personal reading, please buy Sandy Richter’s book and help us get beyond the politics, the privilege and the posturing.

The first instruction from God. Think about it.

Join the conversation on Facebook
Tags:
None
Posted:
June 2, 2020