I recently read Brian J. Wright’s published dissertation, Communal Reading in the Time of Jesus, and want to offer a few comments.

First, there is a tradition that the early Christians were uneducated and non-readers; that reading was more of an elitist activity; that literacy was very low; and that preservation of ancient texts was haphazard.

Second, Wright counters much of this, but he’s not arguing in many places something not known at all but probably not emphasized sufficiently. In particular, Wright argues that the Greco-Roman world had a widespread reading culture in which one person read a text to others. This, I understand, is not unknown to scholarship. Wright shows that this kind of reading was widespread. I’ve not seen any study compiling so much of this evidence. 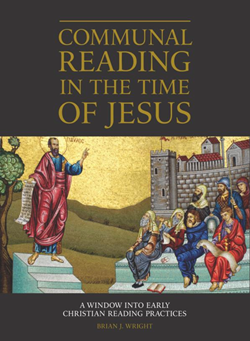 Third, Wright argues that earliest Christianity was like the Greco-Roman world, a reading community. What he’s arguing is that the early Christians performed communal reading with others listening in on the reading. Any reading of the Pauline letters would lead to evidence of letters being read (say Colossians 4), but Wright’s compilation again is second to none in force.

Fourth, there’s plenty of evidence of reading in the NT: from Jesus in Luke 4 reading from the scroll of Isa 61 and Paul telling Timothy to read, presumably to read scriptures aloud to the community (1 Tim 4:13). He shows, too, how pervasive this is to Luke-Acts.

Fifth, what was less demonstrated to me was his desire to show that this communal reading was a means of control of the tradition, the texts, and the teachings of Jesus. Preservation occurred through a variety of means: I would emphasize knowledgeable people, perhaps the taught elders or bishops in local communities, but also memory and writings. I’m just not sure I’d give as much emphasis as he does to communal reading. Yes, but it’s very hard to know the extent of such an influence on preservation. But, yes, the communal reading led to knowledge of the text for more and more people and that led for a more stable text and tradition.

Sixth, the public reading of letters or Gospels would have been “performed” and not just “read” word for word. These texts are designed as much for aurality as textuality, and the moves made by Paul (for instance) are at times oratorical and that will lead to letters being read in such a way that pauses and responses were at work. One can’t read the question and answers of Romans 2-4 and not think it happened that way. It is hard to imagine a reader not making eye contact with so much vital information. It is (for me) impossible to imagine the reader not knowing that some of the reading was going to get under the skin of some of the audience, and that means eye contact, and surely some clarification, some ad lib, some question and answers.

Brian Wright knows the settings for these readings. Most were small. The smaller the setting the more likely the interaction.

Join the conversation on Facebook
Tags:
None
Posted:
March 6, 2020