We are looking at the Christian and law, and to do this we are reading the fine book by David Opderbeck, Law and Theology.

The church is not a temporal nation, and therefore the church’s mission is not to establish temporal political power. However, the church is called to embody the new politics of Christ’s kingdom as part of particular temporal political societies in history. This means that the church’s first interest concerning the positive law in any historical context is simply to support the structures and institutions of a functioning legal system in which there is at least some restraint on grave violence, some principle of consent of the governed, some commitment to the flourishing of creation, including created humanity, and some space for the church’s institutional life.

While Christians in the United States become agitated over whether a transgender student can use one bathroom or another, poor people all over the world are dying in the streets from starvation, disease and official violence, without any functional rule of law at all from a global, historical perspective, our culture war problems are luxuries within an otherwise basically functional legal system.

But it is also true that in the United States, most of the time, it is possible to buy and sell property and commodifies, start a business, resolve a civil dispute, enter into a contract, obtain liability insurance, travel freely, write a book, go to church or not, pass on an estate, get married, get divorced, deposit funds in a bank, take out a loan—and engage in the myriad other transactions of daily life—without violence against the backdrop of an established rule of law.

In the second part of the book Opderbeck examines some major issues, but first he looks at “law in ordinary time.”

Like filing for bankruptcy. A college student graduates in debt, buys a condo and some other electronic equipment to outfit his home for comfort and entertainmen, discovers the loan company was corrupt and collapses, he loses his job, he is now in debt big time, and his lawyer says “file for bankruptcy” and his pastor says “work to pay off your debts and keep your promises.” What to do? 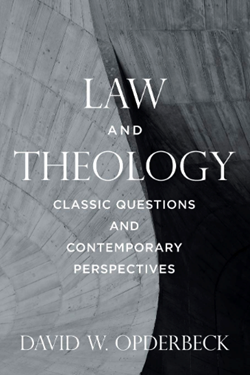 Opderbeck gives the history of bankruptcy law – why it was created and what it was designed to accomplish – and then says this:

Bankruptcy law is a pragmatic response to problems that arise when banks and other lenders extend credit to businesses and consumers. Bankruptcy helps protect debtors from predatory lending practices and eliminates the injustice of debtor’s prison. It also induces creditors to undertake more careful underwriting before extending credit. Ever commercial transaction is undertaken against the backdrop of the bankruptcy laws. The credit a card-issuing bank makes available, and the interest rates and other contractual terms of the debt, all are prepared by sophisticated players and account for the reality that some percentage of borrowers will default and declare bankruptcy. This is one of the reasons the market interest rate for a consumer credit card will be something like 17-20 percent instead of 4—5 percent.

I offer this brief history of usury in Christianity because it shows that even a legal prohibition rooted in a specific biblical command might be modified for practical reasons. Perhaps we could still debate whether Calvin and other Christian leaders were right to change the rule, but there is simply no way the modern world could function without lending at interest. Nearly every element of Your life at this very moment -- your school, your town, your home or apartment, Your car, your local hospital, the job that supplies your income, the farms that produced the food you ate today, the factories that made the clothes you’re wearing, the chair you’re sitting in, the phone, computer, and/or tablet you’re using, the book in your hands—all of it depends on embedded webs of commercial finance. As a practical matter, we must allow lending at interest. The best we can do is regulate the conditions under which credit is extended and provide a safety net through bankruptcy law.

File for bankruptcy or not?

Join the conversation on Facebook
Tags:
None
Posted:
March 4, 2020