What does “image of God” mean? And, more particularly, what did it mean for the apostle Paul when he spoke of such in 2 Corinthians, Romans, and Colossians? The quest to comprehend this expression in Paul has been undertaken afresh by Chris Kugler in his new, invigorating, and challenging book Paul and the Image God. No one will be able to do “image of God” studies again without looking at this fine piece of research.

Theologians have read “image of God” one way (or in theological ways having little to do with the ancient near east, with Judaism, or with Greco-Romans sources), while OT experts have focused on the ancient near east and NT scholars have either focused on Jewish traditions or Greco-Romans sources. The suggestion that Paul has imperial images on his mind is taken into consideration by almost no NT scholars and Kugler gives it no mention.

Along this line, how does “image of God” connect to the Christological questions of our day? All of this and more is in Kugler’s fine published dissertation (with a price to match it).

Kugler helps his readers constantly by summarizing where he’s been, what his conclusions are, and where he’s headed, so I will give his own summary: 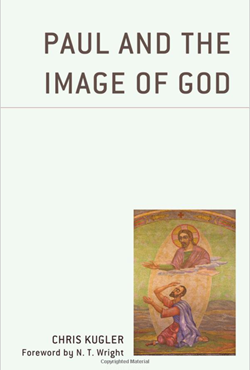 Two major dimensions of his study follow with his own numbering: first, he looks at the context of “image of God” for comprehending Paul and, second, he turns to Paul’s own reworking of that tradition. Kugler thinks Paul’s context combines Jewish wisdom theology with Middle Platonism.

In this book, I have made the following case. (1) While instances of the imago Dei in biblical and second-temple Jewish sources are diverse and pluriform, they are nonetheless illuminating for Paul’s imago Dei theology.

(2) However, this theology is best explained on the hypothesis that Paul, like Philo and the author of Wisdom, made use of “intermediary speculation” in which the kosmos came into being via an intermediary ‘‘figure”: in the latter’s case sophia and/or the logos and in Paul’s case the preexistent Jesus.

(4) Beyond this, a few features of Paul’s imago Dei theology—especially his collocations of eikon (“image”) and prototokos (“firstborn”) (cf. Rom. 8.29; and Col. 1.15) and eikon and morph- language (cf. 2 Cor. 3.18; and Rom. 8.29), as well as his “teleological” construal of the imago Dei conception in which Jesus serves as the archetypal “image” to which believers will ultimately be conformed (2Cor. 3.1 8; Rom. 8.29; cp. Phil. 3.21)—strongly suggest that Paul was here influenced (directly or indirectly) by Middle Platonic intermediary doctrine.

Now to Paul, and he begins with an emphasis on monotheism that reflects the work of Hurtado, Wright, and Bauckham:

(5) On the basis of points (2) through (4), therefore, it is wisdom christology rather than Adam (and/or “royal”) Christology, which serves as the principal background of Paul’s “image Christology.” This “image Christology” furthermore, in which Jesus serves as the protological and cosmogonical image of God, is an instance of “Christological monotheism.” In this regard, especially in the case of Colossians 1.15-20, Jesus is included in the one activity (creation) which most clearly demarcates the “unique divine identity” in second-temple Jewish thought.

His next point is how Paul fashions his opponents as weak philosophers and his own theology as strong philosophy that will lead its proponents to transformation into the “image of God”:

(6) Finally, my argument concerning the way in which Paul adapts certain features of the philosophical imago Dei tradition has allowed for a fresh reading of three major Pauline texts: 2 Corinthians 2.17-4.6; Romans 7-8, and Colossians 1.15-20; 3.10. In these texts. I have argued, Paul casts essentially inner-Jewish debates in philosophical dress. While the substantive issues are “inner-Jewish” issues, Paul presents his opponents and/or opposing views as bound up with a futile and/or deceitful philosophy, while he presents himself and his sympathizers as people who attain to the telos of true philosophy: the image of God (2 Cor. 3-18; Rom 8.29; and Col. 3. 10).

Join the conversation on Facebook
Tags:
None
Posted:
March 13, 2020