A wonderful new book for kids that teaches a parable of Jesus.
Laura Barringer

I am a teacher of primary-age children, and I am continuously looking for developmentally appropriate ways to engage my students in conversations about kindness and friendship. Bibliotherapy is one of my favorite methods for encouraging such conversation, as children readily identify with storybook characters. It is rare for me to read aloud a story and my young students not offer immediate commentary about characters or events or connections to their own lives. “That happened to me!” someone will inevitably raise their hand and launch into an applicable (or not applicable) tale.

I recently was given a picture book worth sharing. It is a marvelous story for children, and it is perfect for parents or teachers who wish to teach children about kindness and empathy and helping others and doing the right thing. The title is Who Is My Neighbor? written by Amy-Jill Levine [my dad’s friend] and Sandy Eisenberg Sasso.

Who Is My Neighbor? tells the familiar parable of the Bible’s Good Samaritan but in a version highly relatable for young children. The story begins, “Once there was a town where only Blues lived…” The Blues, of course, thought they were the coolest color, far superior than Yellows. Blue parents warned their children to avoid Yellow children, and Yellow parents told their children the Blues were not their neighbors. One must only associate with one’s own group, taught the parents. “Yellows are the hottest,” the parents explained. 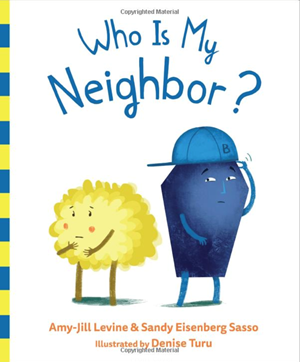 But then one day. One day Midnight Blue went for a bike ride, lost his balance, and tumbled off his bike. Navy and Powder Blue saw and ignored the injured Midnight Blue, leaving him to wonder why his neighbors left him ignored and bruised on the side of the road. “They must not be true Blue,” he concluded. But then Lemon rode by, saw Midnight Blue needed help, and stopped despite her fear of Blues. Lemon picked up Midnight Blue’s books, loaded him onto her bike, and sat with him at Dr. Gold’s office where he was cared for by a friendly and soothing Yellow doctor. “Good as gold!” the Yellow doctor encouraged his Blue patient.

And then a magical little conversation happens between the characters:

“You’re a good Yellow, not like the others,” Midnight Blue said to Lemon.

“So are most Blues,” Midnight Blue said.

Their conclusion: “I would like to be your friend,” Midnight Blue tells Yellow. And so it was.

Lemon and Midnight Blue returned to their respective towns, telling Yellows and Blues about their experiences with one another. It was not the news either color group expected to hear, but their hearts grew open to new possibilities and people and friendships. Instead of fearing one another, they decided to know one another.

And from that time on, “The Blues and the Yellows began to say, Maybe we don’t have to look alike or even live nearby. Perhaps we will like hearing new songs and tasting new foods. We might like making new friends! Maybe we can all help one another!”

The authors list discussion questions for parents and educators, and I conclude with two that I will pose in my own classroom: Have you ever been scared of someone? Have you ever been afraid to do something, even though it was the right thing to do?

Join the conversation on Facebook
Tags:
None
Posted:
March 2, 2020