These texts were written to guide the common worshiper in weekly life, not to plant "bread crumbs" for scientific researchers. (p. 149)

The overarching argument of Michael LeFebvre's recent book The Liturgy of Creation is summarized by the above quote. Having set up the argument in the Pentateuch in general and explored briefly the focus of Genesis 1:1-2:3 it is time to dig into the text. Today the focus is on days 1-3, Gen. 1:1-13.

In the beginning God created the heavens and the earth. Now the earth was formless and empty, darkness was over the surface of the deep, and the Spirit of God was hovering over the waters. (vv. 1-2) 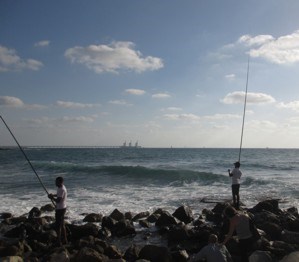 Although some Christians see creation from nothing affirmed and described in the opening verse of Genesis, many others have argued that this is not the intent of the verse. Other passages of Scripture affirm that God created everything and it all exists only through his sustaining providence. However, this is not the purpose of Genesis 1. LeFebvre agrees and notes that 1:1 and 2:1 (Thus the heavens and the earth were completed in all their vast array.) serve as bookends for the creation narrative of 1:3-31.Verse 2 describes the state of the earth as God prepares it for fruitfulness and habitation - it was formless, empty, and dark. Nothing but water.

Day one commences the creative work in Genesis 1.

The light is good. Without light plant and animal life cannot thrive. Thermophilic bacteria are about it - drawing energy from deep sea heat vents. LeFebvre suggests, however, that this focus of day one is not on light, but on the institution of the day as a cycle of light and dark. A day is the fundamental unit of the calendar narrative. He also notes that the translation above calling it "the first day" misses the point. It isn't just the first day - here the unit of one day is defined.

Day two separates the waters above from the waters below, making space for fruitfulness.

And God said, “Let there be a vault between the waters to separate water from water.” So God made the vault and separated the water under the vault from the water above it. And it was so. God called the vault “sky.” And there was evening, and there was morning—the second day. (vv. 6-8)

In many ways, this day causes us the most problems. It uses the ancient near Eastern view of a dome or vault holding back the waters above and making a space for life - plants, animals, and humans. It is hard to read our modern understanding of the earth as a globe in the vacuum of space with an atmosphere contained by gravity into these verses. Our scientific (empirical and observational) view is completely foreign to the text. LeFebvre digs into this a bit (this is the longest section of the chapter, with detours into Augustine, Luther, and truth told in cultural context) - but we will skip to his main point.

"Day two describes the establishment of the heavens with stored rainwater ready to deliver. Rain from above - which is essential for the land's fruitfulness - is the real focus of day two." (p. 157)I emphasized that a space is prepared, LeFebvre sees the primary focus not on this space as much as the on the necessary preparation for fruitfulness that comes only when rains fall. God makes the rain to fall and the separation of waters provides the necessary structure.

And God said, “Let the water under the sky be gathered to one place, and let dry ground appear.” And it was so. God called the dry ground “land,” and the gathered waters he called “seas.” And God saw that it was good. (vv. 9-10)

These verses also don't reflect our globe with continents surrounded by water. The water is gathered into one place to let the dry ground appear. The perspective is far more local, perhaps the Mediterranean (image above) is the one place, but it doesn't matter.

The worldview of the text is tailored to its original audience, even though a modern understanding of the world recognizes many more "places" where water gathers. It was unnecessary for the Lord to teach Moses about the seven oceans and two polar ice caps represented on our modern globes. (p. 164)

A modern geography lesson would only have confused the ancient author (whether Moses or not), editors, and audience. "The emphasis is on dry land that is now freed to be fruitful." (p. 164)

The climax of days one, two, and three is precisely this fruitfulness.

Light, water, and land provides the space for vegetation - for farming and gardening. "God transforms the world into a fertile realm. The potency of the ordered world is demonstrated in the climax of the first half-week. ... The world is now ordered for fruitfulness." (p. 166) The land that God has prepared sprouts vegetation of all kinds.

And it was good

If you wish to contact me directly you may do so at rjs4mail[at]att.net.

Join the conversation on Facebook
Tags:
None
Posted:
May 12, 2020