Which of Paul's letters is the most pastoral?
Scot McKnight

Not everyone agrees on the answer to question like this: Which of Paul’s letters is the most pastoral?

Some would immediately say “The Pastorals, stupid!”

There’s lots to say for that choice, but after teaching Paul for years I concluded that one of his more neglected letters, and one harder to preach to lay folks than many might guess …

… not Galatians (for sure)

… not Ephesians (good guess though) 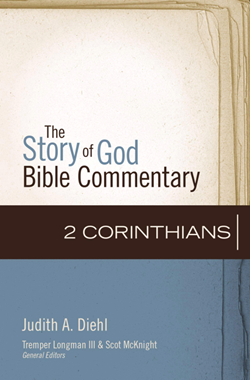 There are no letters of Paul’s that reveal his heart more than his aching love for the Corinthians, his inability to preach and evangelize until he heard news how the Corinthians responded to his letter.

There is also no letter that reveals the problems Paul was having with the Corinthians. In responding to their criticisms he tells us what they were.

He got criticized for money, for his ability (or lack thereof) to preach, and by the time you are doing reading those chapters you feel bad for the chap for all he went through with this congregation.

So I commend to you Judith Diehl’s brand new commentary on 2 Corinthians – a heart felt commentary about a heart felt apostle writing heart felt stuff to his (least) favorite and most demanding congregation.

The letter, through Judy’s commentary, becomes an exercise in pastoral theology by someone who has been teaching and preaching and thinking for years and years.

I’m privileged to be one of the editors of this series and I’ve liked the commentaries so far but this one, I’m sure, will be of immense help to pastors – and especially women pastors.

Judy imagines (it’s not hard to do) Paul on trial: prosecutors are his Corinthians prosecutors, he’s a defendant, their evidence is presented and Paul responds, God is the Judge and offers the verdict … and that means this book is for every pastor on trial in her or his church. You may not like all of Paul’s responses but you will feel his pain and wonder why more don’t study this book in seminary as an exercise in pastoral theology.

Her 70 page intro is worth more than the price of this book.

Join the conversation on Facebook
Tags:
None
Posted:
May 11, 2020