In his broadsheet posted for all to read, Lee Camp pins to the board penetrating criticisms of what the politicization of the church – into partisanship – has done to the church and its witness. All this in his manifesto, Scandalous Witness.

First, we must eschew speaking of Christian values as a form of congenial public discourse and avoid decorating our politics with congenial Bible verses.

The Bible is itself a potential weapon of mass destruction, prone to use, abuse, and misuse. The idolatrous and blasphemous use of the Bible in contemporary politics is immensely destructive to Christianity. Hiding behind “the Bible says it:’ those who employ simplistic citations from the Bible in public discourse are often wrong and disingenuous. The notion of Christian values often works in a sinilar fashion: a loss of the overarching Christian narrative leads to a corruption of Christian witness.

Second, empires fall. We need to resurrect images like Babylon. Not of the opposing party and its leaders, which progressives are doing minute by minute in the media and which the Republicans did every day of President Obama’s presidency, but we must learn to see a Babylon with moral depth and discernment.

Historical observation makes plain that all empires fall. Moreover, throughout the biblical text there runs an anti-imperialist strand, pushing against the hubris and conceit of pharaoh, Babylon, Herod, and Rome. All their conceit finally fails them, and the systems of power of which they are both agents and pawns also fall, because no lord or authority or imperial might will stand against the triumph of the reign of God, in which all authority is handed over to the God and Creator of all things.

And to make such an observation is not a mere instance of Schadenfreude, an adolescent celebration at the misfortune of others. To take seriously the manner in which empires fall allows would-be Christians to configure the correct target for their labors: that the brilliance of our young need not be sacrificed to the strife of partisanship or to the military-industrial-congressional complex or to the dominance of global capitalism. To make such historical observations provides a more fruitful, nimble, and constructive ground from which to contribute to the good of the world. 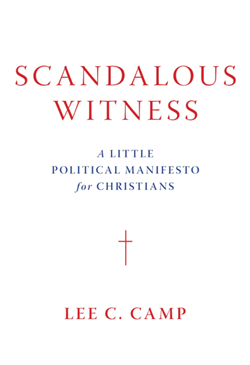 Third, our hostility toward one another deserves to be seen for what it is.

If this is true, then the hostile and belligerent partisanship among American Christians might be compared to a fistfight over table manners on the sinking Titanic.

Fourth, realism needs a downgrade to the Christian vision.

Political realism insists that we must take things as they are and not as we may wish them to be and then work with those “facts on the ground.” Such realism typically insists that competing interests of power must be balanced with other competing interests of power. In the history of Christian ethics, some Christian form of political realism has often insisted, therefore, that the nonviolence of Jesus is unrealistic if we are to make a difference or be relevant in the world.

And fifth, our faith is political to the core.

But if religion is defined as liberalism would have it, then Christianity cannot possibly be a religion. The primary task of the Christian community is not to be a so-called religious gathering concerned with souls floating off into the afterlife, nor is it to be a sort of spiritualized yoga class helping individuals find existential peace with themselves. The primary task of the church is to embody and bear witness to the end of history, an all-compassing reality that has already broken into the world. The primary task of the church is to be an alternative politic. Jesus was clearly a political figure, calling his followers to a particular politic. His politic was a public claim and a public matter.

Join the conversation on Facebook
Tags:
None
Posted:
May 28, 2020