We sometimes invoke the Spirit to “come upon” us when, if we think about it, we believe the Spirit is already “in” us. Yet, both the Bible and our experience teaches us that there is something about the Spirit coming upon.

In Jack Levison’s new book, A Boundless God, we find an entire chapter on the OT expressions of the Spirit “coming upon” and – wait for it – what we read is unsettling, not comforting. Why? because we operate with simplistic categories.

He examines this expression with Balaam, the judges of Israel, Samuel and Saul and David, and then principal figures in 1-2 Chronicles. We can’t cover it all but I want to highlight some emphases we find in Levison’s career passion – to unsettle us with our Christian pneumatology by broadening it to include an OT “ruach-ology.”

The spirit, in short, was not yet tame in the annals of Israelite lit-erature. Absent the creeds,long before Christians annexed philosophy to grasp the nature of the spirit, Israel told stories of a mysterious presence that prompted remarkable feats in the public sphere. The comfortable constraints of later generations were not yet in place;this is untamed wilderness. Not gardens but forests. Not fields but plains.

First, once again: spirit-Spirit-wind-breath, which is it? We don’t always know. Spirit of God as a good spirit and spirit of God that is an evil spirit? Yes, both in the OT in the days of Saul. Human spirit and divine spirit then are not easy to distinguish. This is worth our pondering more and more. 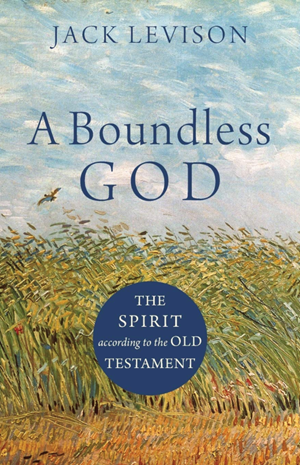 Second, sometimes God’s spirit/Spirit comes upon someone outside the people of God, like Balaam.

p.p1 {margin: 0.0px 0.0px 0.0px 0.0px; font: 14.0px 'Times New Roman'}span.s1 {font: 11.0px 'Times New Roman'}span.Apple-tab-span {white-space:pre}Now Balaam saw that it pleased the LORD to bless Israel, so he did not go, as at other times, to look for omens, but set his face toward the wilderness. Balaam looked up and saw Israel camping tribe by tribe. Then the spirit of God came upon him, and he uttered his oracle, saying, “The oracle of Balaam son of Beor, the oracle of the man whose eye is clear...”.

Balaam had already realized that God would not bless or curse Israel through ill-gotten omens berore the ruach came upon him: “Balaam saw that it pleased the LORD to bless Israel, so he did not go, as at other times, to look for omens, but set his face toward the wilderness.” This is an important detail. Balaam already underwent a change of heart by the time “the ruach of God came upon him, and he uttered his oracle.” The spirit was not upon Balaam in order to work against the wicked wiles of a non-Israelite. On the contrary-and this may be one of many surprises in the Old Testament-the spirit came upon a receptive non-Israelite seer, an outsider, someone not included among the chosen nation.

Maybe, one wonders now, if we ought to be looking for the Spirit to speak from sources we have not previously thought capable of Spirit-inspired speech? Thoughts?

Now on to the Judges, where we encounter the Spirit coming upon them to judge.

p.p1 {margin: 0.0px 0.0px 0.0px 0.0px; font: 14.0px 'Times New Roman'}But when the Israelites cried out to the LORD, the LORD raised up a deliverer for the Israelites, who delivered them, Othniel son of Kenaz, Caleb’s younger brother. The spirit of the LORD came upon him, and he judged Israel; he went out to war, and the LORD gave King Cushan-rishathaim of Aram into his hand; and his hand prevailed over Cushan-rishathaim. So the land had rest forty years. Then Othniel son of Kenaz died.

What happens when the Spirit comes upon? rushes upon? is upon?

When the spirit rushed upon Samson for a first time, he tore apart a lion (Judg. 14:6). A second time, “he went down to Ashkelon” and “killed thirty men” (14:19). A third time, the spirit gave him super-human strength, causing what bound him to melt; immediately he found the fresh jawbone of a donkey and killed a thousand men with it (15:14-15). These episodes seem to confirm the connection between the spirit and violence.

Despite this impression, there may be a way to interpret the stories of Samson without attributing violence to the spirit. It may be, as the story is told, that the spirit actually attempts to keep Samson from becoming violent…. In each instance, then, the spirit does not come upon Samson to inspire him to kill his enemies; the spirit comes instead, in light of his first experience, to preserve his Nazirite vow. In each instance, Samson resists the spirit, instead acting cavalierly, failing to respond to the rush of the spirit, and failing, consequently, to obey his vow. Ultimately, he brings death to his enemies only by dying himself. Utter tragedy.

The big picture, Levison notes, is liberating the people from oppressors and maybe we ought to stick to that theme and see it through:

If the spirit is to be active in the world, not just in individuals or the church or the safety of some spiritual realm tucked neatly away from the fray of human history, then the spirit, according to the book of Judges, equips leaders to engage in violent means of liberation.

Perhaps the book of Judges preserves the memories of a period in which, as the codicil puts it, everyone did what was right in his or her own eyes because there was no king in Israel (Judg.21:25). It was an era of anarchy, of generals murdered with tent pegs by women like Jael (Judg. 4-5), of Nazirite vows disregarded by rnen like Samson, of silly vows made by men like Jephthah (Judg. 11-12), of treachery executed on women like the Levite’s concubine (Judg.19). Perhaps we should not extrapolate from these appearances of the spirit a pattern of inspiration. Perhaps this was an era that need not -must not- be repeated. Perhaps that, too,is a lesson to be taken from this book of terribly flawed heroes, tyrannical oppressors, and tawdry, terrifying acts of liberation.

Now on to Samuel and Saul

The similarities between the spirit of God and an evil spirit in the story of Saul are stunning, puzzling, and inescapable. Both spirits are called a spirit of God. Both rush upon or are upon Saul. Both depart from Saul.

Read these passages: comments? Thoughts? What about a “ruach-ology” to supplement our pneumatology? Not so tame, I suspect.

1 Sam. 16:13 Then Samuel took the horn of oil, and anointed him in the presence of his brothers; and the spirit of the LORD came mightily upon David from that day forward. Samuel then set out and went to Ramah. 14 Now the spirit of the LORD departed from Saul, and an evil spirit from the LORD tormented him. 15 And Saul’s servants said to him, “See now, an evil spirit from God is tormenting you. 16 Let our lord now command the servants who attend you to look for someone who is skillful in playing the lyre; and when the evil spirit from God is upon you, he will play it, and you will feel better.”

Because you have rejected the word of the LORD,

he has also rejected you from being king.”

1Sam. 18:10 The next day an evil spirit from God rushed upon [toward] Saul, and he raved within his house, while David was playing the lyre, as he did day by day. Saul had his spear in his hand;

1Sam. 19:9 Then an evil spirit from the LORD came upon Saul, as he sat in his house with his spear in his hand, while David was playing music.

Join the conversation on Facebook
Tags:
None
Posted:
May 11, 2020