The friendship of Dorothy Sayers and C.S. Lewis
Scot McKnight

If one judges the greatest time in political history one should point at Classical Athens in the days of Socrates, Plato, and Pericles. If one ponders the greatest time of raw intelligence, one might well agree with Joseph Epstein who contends it would be mid- to late 18th Century London and includes Samuel Johnson, Edmund Burke, Edward Gibbon, James Boswell, Adam Smith and David Hume – not a bad gathering, one must admit. [Additional books mentioned in this piece are listed at the end.]

About the great Christian literary period there can be no question, and instead of a period we simply have to say The Inklings, but even that is not quite right. We’d have to list George Macdonald, G.K. Chesterton, C.S. Lewis, Owen Barfield, Charles Williams, J.R.R. Tolkien and Dorothy Sayers.

About Tolkien and Chesterton the world knows aplenty, and about Lewis far more – the biographies about Lewis have become an industry, the top two being Roger Green with Walter Hooper and George Sayer. About the others plenty but not as much as these three.

What is perhaps more interesting is their relationships, and here one turns to Humphrey Carpenter’s The Inklings and now to the far more complete book by the Zaleskis. The way they talked to one another in such stiff terms no doubt tore apart some of the relationships, though Lewis and Tolkien were on decent terms when Lewis died of cancer. Charles Williams, for instance, couldn’t stand Tolkien’s stories and Tolkien would not read his stories to the Inklings when he was present (I think that’s how it went).

What has puzzled me at times over the years was the relationship these blokes had with Dorothy Sayers for she was every bit in their day a rival of public glory with both her Peter Wimsey novels as well as her non-fiction books about Christian theology.

Lewis and Sayers wrote one another, quite a lot it turns out. I have never sat down with all of the Lewis or Sayers letters to collect their correspondence and read it front to back to see what I could find, but someone now has and she has made a splendid, charming book of it.

A book like this must be read and not summarized too much for others, for it is the subtle detail and the telling line and the special (unknown to me) stories that give this book its special character, and character it has. So, just a few observations.

Sayers was never an Inkling. She could have held her own with any of them. Like Lewis, but unlike Tolkien, she was enraptured by Williams, whose sick behaviors were not known by them at the time.

Both Sayers and Lewis have odd elements to their biographies, Sayers with a son raised by another and Lewis with sexual fantasies barely known (George Sayer has some of this). 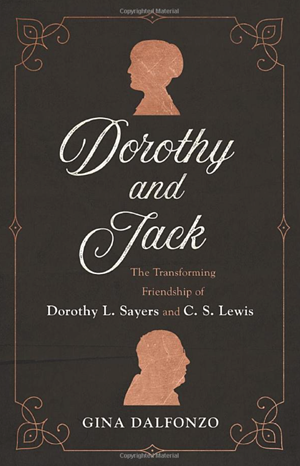 Sayers was more committed to the art form than Lewis, and in her correspondence with Lewis they engaged rather fiercely over how art and impact were to be related. She had little desire to be a “Christian” storyteller as she wanted her stories to be the stories they should be.

If you write about Lewis or Sayers forget being able to quote either of their letters or works at length, so this book has only some of the correspondence. Dalfonozo must summarize or pay a very hefty price, so she summarizes – and summarizes well. I’ve gone to my editions of the letters because of her summaries already.

Lewis was a chauvinist. Yes, to be sure, his mother died when young, he went to all-boys schools and was at Oxford among mostly males and his friends were almost all males, and his relationship with Mrs. Moore was hardly anything that would drive out his chauvinism. But Lewis changed and one of the highlights – if not THE highlight of Dalfonzo’s book – was the transformation in his attitude toward women because of Sayers’ relationship with him. Some of the stories later in the book are very moving and have made me adjust my own understanding of Lewis’ biography.

As The Inklings began to fall apart Sayers became Lewis’ intellectual friend, and then personal friend, and I gotta tell you as I was reading this I wondered if they might have developed more spark had not Joy Davidman came along. This, too, is for me a major highlight of Dalfonzo’s book: I had no idea how much they corresponded and what such a rich friendship developed.

When Lewis learned that Dorothy Sayers had died he cried, and Douglas Gresham said it was the first time he saw his stepfather cry. Lewis loved Sayers.

Join the conversation on Facebook
Tags:
None
Posted:
November 23, 2020