While NT Wright’s newest book, Broken Signposts, sounds a bit like the first half of his bestseller Simply Christian, this new book is a new thing altogether. What makes this book so new is that it rooted in what Tom has not published so much about – The Gospel of John.

His first exploration was about justice, the second is about love. Justice is an impersonal thing that excites our imagination but love is personal and goes therefore deeper.

Love is all about relationship, about “I” becoming more of myself in relationship with anther “I.” In a world of constant moving and shifting and changing we are relationally deficient, robbing us of love in relationship. So we search and claw and grab for what we hope is love.

Something is amiss, and it is what is going on in wedding when hope for love is re-awakened. We know love matters, we find it difficult, it is what matters but it is a broken signpost.

Now before the festival of the Passover, Jesus knew that his hour had come to depart from this world and go to the Father. Having loved his own who were in the world, he loved them to the end.

No one has greater love than this, to lay down one’s life for one’s friends. You are my friends if you do what I command you.

If one reads, Wright suggests, John from 13:1 to the end one sees what love is, and that it costs everything (40). Read from the beginning, the same occurs: a Gospel of Love. John 11’s raising of Lazarus is an act of Jesus’ love for his friend. Thy pyramid of all of life is turned upside down, he imagines, and balanced on this one point: the love of God in Christ. 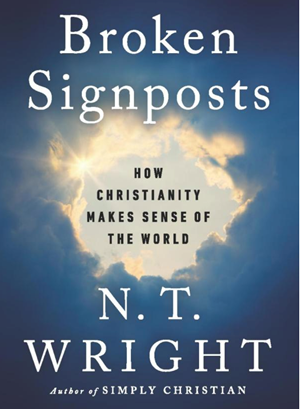 The Trinity reveals love as it reveals interrelationality of Father, Son, Spirit. Jesus is God incarnate, not a principle about God revealed, but God revealed.

Jesus answered them, “Destroy this temple, and in three days I will raise it up.” The Jews then said, “This temple has been under construction for forty-six years, and will you raise it up in three days?” But he was speaking of the temple of his body. After he was raised from the dead, his disciples remembered that he had said this; and they believed the scripture and the word that Jesus had spoken.

Wow, he is the temple. The embodiment of God present and the embodiment of our access to God and God’s mediation to us. A big theme anticipated in the OT. If God chose to dwell in Jerusalem’s temple, then incarnation makes sense (49). God’s glory is present among us in Jesus.

I am the good shepherd. I know my own and my own know me, just as the Father knows me and I know the Father. And I lay down my life for the sheep. … p.p1 {margin: 0.0px 0.0px 0.0px 0.0px; font: 14.0px 'Times New Roman'} span.s1 {font: 11.0px 'Times New Roman'} My sheep hear my voice. I know them, and they follow me. I give them eternal life, and they will never perish. No one will snatch them out of my hand. What my Father has given me is greater than all else, and no one can snatch it out of the Father’s hand. The Father and I are one.

To reframe his words: the master of everything has been mastered by an unjust death and in being mastered he masters death by resurrection. In this we see the Father’s love for us.

Love takes death and defeats it.

This kind of love, broken as it is in our world, opens the door to see God as the one who loves us.