What was once a surprise is no longer so
Scot McKnight

Saying it is surprising, even saying it over and over, doesn’t make Christianity surprising. We must nurture that surprise. 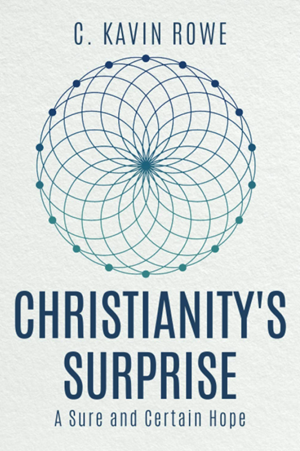 Which is what C. Kavin Rowe writes about in his wonderful – and I hope it becomes a classic – called Christianity’s Surprise: A Sure and Certain Hope.

We think we already know what Christianity is. And, to some extent, we are right. On the long march from its origins until now, Christianity has penetrated almost every layer of every society and culture in the North Atlantic West. Pull out Christianity from the complex tapestry of Western history, and the whole thing would unravel. Whether in fine art or architecture, pop culture or celebrity athletes, corner churches or political debates, intellectual circles or policy wonks, Christian language, Christian images, Christian influence, and Christian legacies abound. Even the religion-haters, as misinformed as so many of them are, turn out to have Christianity in particular in mind when they go on the attack.

Few recognize these observations for the penetration: The West and Christianity are inseparable. Without the latter the former isn’t what it is. Even the debates and the disagreements are framed by Christianity.

But in an equally important sense we are wrong. We don’t really know what Christianity is. The stronger currents of the last two or three centuries have carried us away from basic Christian understandings of the human being and the world in which we live, as well as from habits of being informed by Christianity’s long history that structured much of common life. [He gives the following, I reformat.]

The biblical God is no longer the horizon of human life; the human is an autonomous individual now, able to determine for itself what it wants for itself and how to get it; the public square is consistently championed as a place where religious people should not bring their convictions; major moral decisions are made by reference to personal preference and senti-ment; churches are seen to be the same thing as other “voluntary societies”; economic realities have erased Sunday as a unique mark of the week,and so on.

These currents are all relateci in complicated ways, but the effect of their combination on present existence is rather simple to name and easy to see: we have developed societal amnesia and ignorance of what Christianity originally was – and what it still can be.

Amnesia, for sure. His point is the challenge of this book: what to us is perhaps ordinary and invisible was at the time utterly extraordinary and far too visible.

Originally, Christianity was a surprise. It was not anticipated, and many of the things it brought with it as it came into the world were completely surprising. No one could yet take it for granted, and no one had forgotten what it was. Some – notably the Romans, off and on – did try to extinguish it, but to no avail. Instead, over the course of a few centuries, Christianity grew from a minute Jewish sect into the dominant religious force in the Roman world. Sociologists of religion have various explana-tions for this growth – some more, some less plausible – but what should be common to all of them is the fact that no one could have predicted it.

Of course, today it seems self-evident and even rather natural to think that Christianity focuses on Jesus. He is, after all, the reason for Christianity. But we have forgotten just how radical and unheard of this was. In fact, no matter how you cut it, the most surprising thing of all about early Christianity was the unique and utterly intense focus on a singular Jew, Jesus of Nazareth.

Rowe looks then at three major elements of the surprise: the story of everything, the human, and the institutions.

Join me and read this thrilling book.

Join the conversation on Facebook
Tags:
None
Posted:
October 19, 2020