I’m grateful for the widespread positive reception of my book, Reading Romans Backwards. I have heard from professors using it, from pastors preaching it, and from others who found it a stimulating read.

Romans is off putting for many today, not only because of its length and complexity but because it has become so much about theoretical theology and not real-life stuff. I attempted to show that if read it from the back we see the real-life stuff as more influential on the so-called theoretical stuff.

Romans of course is the most influential book of the Bible when it comes to the formation of Christian theology, especially in the Protestant tradition.

Sermons: many of the most influential and widely-read and -respected preachers proved themselves in Romans. I’m thinking of Donald Grey Barnhouse, Martin Lloyd-Jones, Fleming Rutledge, and John Piper.

Romans matters. Deeply. I’m hoping my book can add to this tradition of its influence.

This review at the AAR site was particularly gratifying. It gives the reader an accurate taste of what’s in the book. Thanks for the permission to repost it here and the link to the site is below after the reviewer’s name.

How about for a study group in your church? (Think about it.)

Attempting to address the problem of fatigue that comes with reading Romans forwards and the consequent neglect of the elements of the community of faith presented in the end of the letter, Scot McKnight suggests a different strategy: read Romans backwards.

In the introductory chapters of ​Reading Romans Backwards,​ McKnight explains both his approach and his argument. In regard to approach, McKnight explores a contextual reading of Romans that attempts to hear the letter through the imagined ears of the Weak and Strong rather than traversing the textual possibilities and theological probabilities of Romans through an interaction with the mountain of scholarship devoted to Paul’s most celebrated letter (x). Concerning his argument, McKnight reads the letter backwards in order to argue that “Romans is a pastoral theology about Privilege and Power in search of Peace in the empire” (xiv). 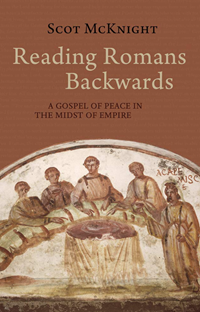 The book is divided into four parts, each of which coincides with McKnight’s broad and backward outline of Romans. Part 1 addresses Romans 12–16 and reveals the pastoral context of the letter: a divided community in need of peace. Starting from the end, McKnight first introduces the courier and reader of the letter, a woman named Phoebe, who is described as a deacon, leader, patron, and sibling to the house-churches and becomes Paul’s presence everywhere she reads the letter. McKnight asserts that she will know what to emphasize and whom to face when addressing the division between two important groups of people: the ‘Weak” and the “Strong” (3–5; 92).

According to McKnight, the Weak are mostly Jewish believers who are in “the stream of God’s election,” know and practice the Torah, probably continue to attend synagogue, and judge the gentiles, especially the Strong in Roman house-churches even though they do not have status or power in Rome (21). The Strong are mostly gentile believers in Jesus as Messiah or king, do not believe Torah is God’s will for them, and have despising attitudes toward Jews and Jewish believers. All of these elements are wrapped up in the high power and status of the Strong in Roman society (21). Though Paul does speak harshly to both groups, McKnight assigns Paul with the Strong on at least the dividing issue in the house churches: “Torah observance is not necessary for the lived theology of the Christians in Rome” (22). What is crucial for Paul is that the Strong and the Weak “welcome one another to the table as siblings” (23). McKnight argues that Paul shapes his vision of a lived theology from this social reality. The central idea of his lived theology is “Christoformity,” which is expressed in “an embodied God orientation, a Body-of-Christ orientation, and a public orientation” (27).

Pushing on in reverse, part 2 discusses the important themes of Romans 9–11, God’s faithfulness to Israel and the inclusion of the gentiles in God’s Messiah, within the pastoral context outlined above as a narrative of peace, not privilege, not power. This approach reveals Paul’s message to the Weak and the Strong: they are to embrace one another as siblings (88). 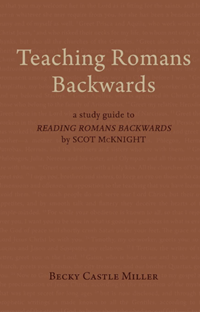 Treading backward still, part 3 covers Romans 1–4 and serves as a deconstruction of the Weak’s claim to election privilege and to their approach to how to live as Christians in Rome. The Weak thought that if everyone would adhere to Torah like them, then the Weak and the Strong could be united as siblings. Paul’s articulation of the “Abraham-rooted gospel of redemption in Christ by grace through faith” is what unifies the Strong and the Weak as siblings, not observing the Torah (142).

Finally, part 4 engages Romans 5–8 and maps Paul’s theological rationale for the lived theology described in Romans 12–16. Both groups, the Strong and the Weak, once trapped by sin, flesh, systemic evil, and death are now offered grace, righteousness, justice, and eternal life in Christ by the Spirit. The Strong and the Weak can welcome one another to the table (145–56).

Commendation is warranted for McKnight’s creative approach to reading, quite arguably, the most significant Pauline letter and the most influential New Testament book in the history of Christian theology. Reading the letter backwards effectively brings new sets of connections with the lived theology of Romans 12–16 to the rest of the letter. One of the keys to McKnight’s successful contextual reading is his commitment to explain and reframe the social and political division between the Weak and Strong at each point along the way. The reader will also appreciate McKnight’s engaging writing style, as he presents the pastoral intent of the letter in such a way that one can envision the house churches experiencing Phoebe’s performance for the first time.

Opposition to both McKnight’s approach and argument will certainly come from those within the Reformed school of thought, specifically those who read the letter with a soteriological orientation and who view the message of redemption (that is, justification by faith) as the centerpiece of the letter. In other words, they will continue to view the letter as the articulation of Pauline theology followed by its application rather than a new kind of lived theology and a rationale for that praxis. Unfortunate criticism will also come from scholars who reject women in ministry leadership, as they will disagree with McKnight’s description of Phoebe’s multifaceted ministerial role in the community, as well as his insistence that a woman was the first one person to deliver, read, and perform the letter of Romans.This innovative reading strategy poses a strong challenge to the assumptions of traditional readings of Romans. McKnight’s serious treatment of the lived theology of Romans will make this book interesting for scholars specializing in New Testament, theology, and religious studies. Seminary-trained pastors will appreciate the emphasis on the pastoral nature of Romans, though McKnight’s backward reading may change the way they approach the letter indefinitely. All readers will take note that context is key when reading the biblical text.

Join the conversation on Facebook
Tags:
None
Posted:
February 1, 2021