We in the USA live between two loud arguments. On the one side are those on the Left who think anyone with a reliigious faith or wants to use a religious faith ought to be banned from the public square, and on the other side those on the Right who think the USA is a Christian Nation and they want to take America back for God.

The discussion is not so much a flashpoint today as it is in need of a reminder, and Randall Balmer’s new book, Solemn Reverence: The Separation of Church and State in American Life, is the ticket to get into the room where it happens. Balmer’s book is available today.

For instance, on this Right vs. Left issue, Balmer writes:

Some on the left argue that voices of faith have no place in the arena of public discourse, while those on the right don the mantle of victim, insist that the United States is a Christian nation, and engage in rhetorical Kabuki to assert that the First Amendment does not mandate the separation of church and state.

One political principle that helps me on this very issue, because conflicts are sure to come, and often with a vengeance, is this: for every right we claim is a matching duty we are to follow. If I want my religion respected, I have a duty to respect the faith of others. Many today are all rights and no duties.

Some want duties without any rights of dissidence.

Who needs this book? Pastors, professors, and all those who want to preserve one of the great distinctions of America. One might say, and I say this (not Balmer), that this distinctive American theory – the separation (more below on that term) – is Anabaptist.

Why? Because they were one of the first in the modern world (and before that) to insist on respect for those with a different faith than the nation’s traditional faith. Whether it was Catholicism (most common) or Lutheran, they wanted to be able to worship in peace and safety.

Up and down the Atlantic seaboard you could find them all, often gathered together, and often at odds with the colony next door. At times in specific areas one of those denominations overwhelmed the others, seemingly making them illegal and at other times putting pressure on them to conform.

One of the characteristics of the Atlantic seaboard during the colonial period was its religious diversity, ranging from Puritans in New England to Anglicans in the South. In between, groups as diverse as Baptists in Rhode Island, the Dutch Reformed in the Middle Colonies, Swedish Lutherans in Delaware, Jews in New York City, Presbyterians in New Jersey, Catholics in Maryland, and Quakers in New Jersey and Pennsylvania all established a toehold on the religious landscape of colonial America. In addition, Pennsylvania alone sheltered diverse religious minorities including Lutherans, Mennonites, Moravians, and Schwenckfelders. 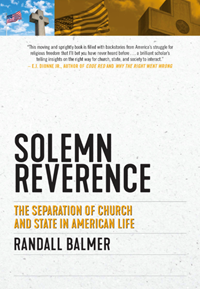 I wonder if we realize just how pluralistic and supposedly tolerant our founding was. It is at the heart of the American experiment not to establish one religion and to respect the religions of its people. Or no religion.

That tussle has never really ended but it’s in the news again, at times with considerable heat. Balmer writes,

The First Amendment, with its insistence on the separation of church and state, religion and politics, is under attack as never before. “Congress shall make no law respecting an establishment of religion, or prohibiting the free exercise thereof,” the initial clause of the First Amendment reads, and those sixteen words have served both government and faith remarkably well for more than two centuries. And yet various interests have sought in years to chip away at what Roger Williams, the founder of the Baptist tradition in America, called the “wall of separation” church and state (my emphasis).

Congress shall make no law respecting an establishment of religion, or prohibiting the free exercise thereof.

My testimony then ... is that the First Amendment is part of the genius of American life. It has protected the common good from religious factionalism, and it has ensured the integrity of faith from too close an alliance with the state.

We need to read that First Amendment again and again, and let it soak into our bones.

Notice too the implied diversity and pluralism our country wants.

When Congress appointed a committee on July 4,1776 to design a seal for the new nation, the committee recommended E Pluribus Unum – out of many, one – as the nation’s motto, a nation comprising people representing a great variety of ethnicities and religions.

Again, notice the number of different forms of faith Balmer gave us above.

But today this is under question.

Were I to identify a foil for this book, it would be those voices claiming that the United States is, and always has been, a Christian nation. That assertion is demonstrably false. Those same voices have sought, and continue to seek, a diminution of the First Amendment and its wall of separation between church and state. That, in my view, is a dangerous course. I say that not as a secularist trying to root out all expressions of religion but instead as someone who believes along with Roger Williams that religion functions best from the margins and not in the councils of power, that the integrity of the faith suffers from too close an association the state (emphasis mine).