The heavens declare the glory of God;
the skies proclaim the work of his hands. Psalm 19:1

Is the earth roughly spherical, orbiting around the much more massive sun, with a far less massive moon orbiting the earth?

Is the universe expansive, with stars and galaxies light years away from us?

Does a 21st century vision of the solar system or the galaxy shape your reading of Genesis or the Psalms?

Denis Lamoureux digs into these kinds of questions in the next couple of chapters of his book The Bible & Ancient Science introducing concepts in biblical interpretation. When reading the Bible when and where should we expect to find correspondence or concordance with fact? Lamoureux argues that the Bible is a book of redemption. "The primary purpose of the Bible is to deal with our relationship with God and to make us realize that we have damaged it though our own sinfulness." (p. 28). There is a spiritual correspondence between the teachings of Scripture and spiritual reality. This is fundamental to our belief that the Bible is the word of God.

But is there a scientific concordance or correspondence between statements about the physical world in Scripture and physical reality as we understand it today? Denis's answer, and mine, is not necessarily. Human understanding of cosmology has changed through the years and these changes are reflected in Scripture and in the writings of Christians over the last two millennia. Kyle Greenwood has a nice book Scripture and Cosmology for those who wish to dig into this a little deeper. 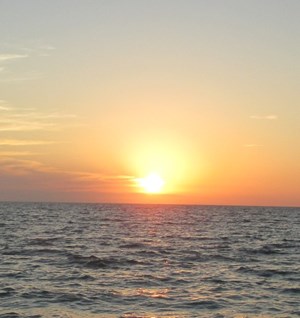 While God could have embedded our modern understanding of cosmology into the text, there is no indication that he has done so. Rather the Bible uses concepts familiar to the original audience to describe the world. There is a vault above (Genesis 1:6-7) and the sun, moon, and stars are placed in this vault (Genesis 1:14-19). The sun moves around the earth daily, with no mention of the spin of the earth giving us night and day. Today we envision the spin of the earth rather than the motion of the sun giving rise to the sunset over the sea. The ancient audience envisioned instead the motion of the sun across the vault of the sky.

Therefore God exalted him to the highest place and gave him the name that is above every name, that at the name of Jesus every knee should bow, in heaven and on earth and under the earth, and every tongue acknowledge that Jesus Christ is Lord, to the glory of God the Father.

The reference to heaven, earth, and under the earth is a reference to a 3-tier universe with a vault, an earth, and an underworld. A common understanding in the ancient world. Of course, the spiritual message is clear, despite the fact that our view of the universe is somewhat different. We have a much more expansive view of the physical heavens, a spherical earth, and have dispensed with the notion of an underworld in the ancient sense. However, we still understand that everything being in God's creation should bow to Jesus. Even more importantly, that we should bow and acknowledge that Jesus Christ is Lord.

The issues become serious when we insist on a scientific concordance between cosmology and aspects of physical reality as described in Scripture and cosmology and physical reality as we understand it in the 21st century. We are left with two choices: either to read our modern understanding into the text ignoring the ancient context, or to twist scientific observations to match our "biblical" expectations. These two approaches are often combined depending on the question asked (e.g. reading a spherical earth into Scripture while insisting on a universal flood covering the earth ca. 3000 years ago). Neither approach is particularly satisfying. Both lead to issues with credibility.

Denis Lamoureux argues that "Even if we disagree with an author's point of view or understanding of the natural world, we must always respect his or her original intention for writing a passage. Otherwise, we could make a passage mean what ever we wish for our own purposes." (p. 34-35) It is good that the new version of the NIV translates Genesis 1:6 And God said, "Let there be a vault between the waters to separate water from water." translating the Hebrew word raqia as vault rather than using expanse as in the older version. John Walton noted in his NIV Application Commentary on Genesis:

Despite the NIV's attempt to mitigate the meaning of this word through an ambiguous translation such as "expanse" and the attempt of others to make is scientifically precise through the translation "atmosphere," P. Seely has amply demonstrated that raqia, structurally speaking, was perceived by the Israelite audience as a solid dome. (p. 110)

John goes on to point out that changing the translation "puts our scientific understanding in the driver's seat." It is, "indeed, a rewriting of the Bible." This is not the appropriate way to read scripture as the word of God. Denis Lamoureux agrees, "our challenge is to suspend our modern scientific ideas, and not to ... force them into the Word of God." (p. 35) He goes on "Instead, we need to recognize and respect the ancient science in the Bible, even though we disagree with it. And we must ... draw out from the Word of God the inspired writer's intended meaning." (p. 36)

Returning to the image of the sunset. Psalm 19 continues:

In the heavens God has pitched a tent for the sun.
It is like a bridegroom coming out of his chamber,
like a champion rejoicing to run his course.
It rises at one end of the heavens
and makes its circuit to the other;
nothing is deprived of its warmth. Psalm 19:4-6

Frankly, I think there is wisdom (no surprise here since we are talking about God) in an approach that accommodated to an ancient understanding of the motion of the sun through the vault without introducing the concept of a spinning earth to the ancient audience. With no disrespect for the sophistication of the ancient audience, it is easier to look backwards, and reinterpret the essential meaning in terms of a spinning earth than to dump foreign concepts, unimportant to the meaning, on the original audience.

What does it mean to respect the text as the Word of God?

Join the conversation on Facebook
Tags:
None
Posted:
January 26, 2021