Redemption to eternal life -- and this life too?
Scot McKnight

Two questions. One from the rich young ruler in the Gospel of Mark. One from Aristotle.

What must I do to inherit eternal life?

What must I do to obtain the good life?

One more question for you: Are the two questions the same?

Julien Smith thinks so. His book is called Paul and the Good Life.

For the wages of sin is death,
but the free gift of God is eternal life in Christ Jesus our Lord.

Smith’s contention is that salvation is from and to, from sin and death and to life transformed in the here and now. Thus, Colossians 1:13: “ p.p1 {margin: 0.0px 0.0px 0.0px 0.0px; font: 14.0px 'Times New Roman'} He has rescued us from the power of darkness and transferred us into the kingdom of his beloved Son.” This text expresses this “from” and “to.”

Jesus is the king who rescues us from one dominion (slavery) into another (his gracious rule).

In many ways Smith is building on the shifting of redemption themes from NT Wright and others: the gospel, yes, saves from sin but the gospel is transformative power. It is not just about where we go when we die but what we do in the meantime. 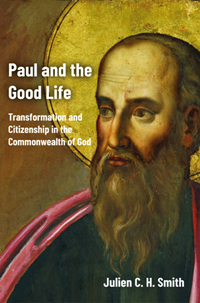 Smith is right: it would be shocking for Paul to think we think he thought it was all about life after death. Paul believed in the transformative power of God’s grace.

What he contends is that we need a new social imaginary for what Paul thought: “in which we are citizens of a heavenly commonwealth, in which we are being transformed individually and communally into the image of the king Jesus, and in which we eagerly await the restoration of creation through the consummation of Jesus’ reign” (23).

That life now occurs in the context of:

Join us in reading this book.

Join the conversation on Facebook
Tags:
None
Posted:
January 7, 2021